When people hear the words ‘paranormal romance’ today they will most probably associate it with the popular Twilight franchise, and maybe even the HBO television series True Blood. It is strange to think that the original horror novel Dracula was actually a romance of sorts, although it was grotesque and evil to reflect Victorian values.
It is no longer acceptable to have a truly evil vampire who preys on innocent humans. We have evolved in our society to a point where we realise our arrogance in the face of such stereotypical views. In contemporary paranormal romance novels, vampires, shape shifters, and other non-human creatures are often treated as another race, a group of people that should not be discriminated against, but that are reviled for their supernatural abilities and nature.

I have recently finished reading Dead Reckoning by Charlaine Harris. It is the latest of the Sookie Stackhouse novels, and I really enjoyed it. There was a clever mix of supernatural activity, and everyday ‘normal’ human life. The heroine, Sookie, spends her evenings fighting manipulative and unpleasant vampires and shape shifters, and her day time hours are filled with household chores and paid employment. She struggles to fit in her human friends, and their baby showers and weddings, and all of the standard rites of passage that humans live by, and that are safe, happy events.

My novel Love Hurts follows this pattern, or at least that is what I intended. My heroine is a human (or so she believes), who runs a small business with her close friend. She is dating a vampire, and once she discovers his hidden secret (because in my Britain, supernatural creatures still remain hidden from society), she then struggles to merge her human life with her supernatural one.

This is where I am drawn in with the genre. I love the idea that mundane life can be livened up with a different cultural perspective, especially an apparently violent and volatile one. It makes life interesting. We need an escape from our daily household routine, and our regular pattern of work and play. That is what paranormal romance offers, and I love discovering new and exciting authors who weave their own perspective and experiences into their tales. 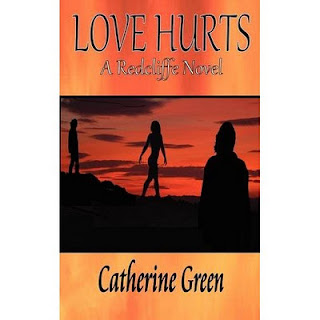 I hope that other people will read Love Hurts and will feel the same excitement and enjoyment that I did when I wrote it. And that those same people will follow my heroine Jessica Stone, as she stumbles through a relationship with a vampire and his identical twin werewolf brother, while supporting her human best friend with a new baby. Oh, and she has a gay best friend who is a werewolf too, just because I can!
Posted by SpookyMrsGreen at 11:09