Spirit Sisters and the Redcliffe Novels

This weekend (Sunday 6th May) I will be at the Crowne Plaza Hotel in Chester, UK to talk about my Redcliffe novels. I will sell signed copies of Love Hurts (A Redcliffe Novel) and The Mirador Fantasmagoria, and I will tell people about the upcoming release of Love Kills (A Redcliffe Novel). As part of this promotion I will do a free talk about my books and my work as a spiritual advisor for Spirit Sisters. 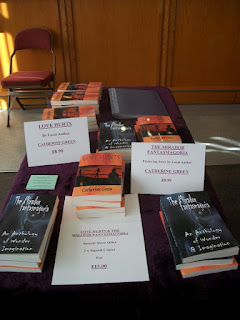 There have been several occurrences lately which led me to believe in the connection between myself as a psychic medium and my work as an author. For example, I described to my editor how I envisioned the artwork for Love Kills (A Redcliffe Novel). She responded very excitedly by saying I had described almost exactly what she and her design team had been considering. Coincidence or psychic knowledge? I prefer the latter explanation.

The more I progress on my spiritual pagan path, the more excited and amazed I become at the events that unfold around me. Two years ago I never considered the fact that I would be preparing to launch my second novel, having written a third and currently writing a fourth. It seems that once I stepped out of my rational, restrictive mindset, I was set free to truly express myself and do what is natural. And the result is exhilarating, exciting and totally rewarding. Now you must excuse me, I have some writing to do...

Posted by SpookyMrsGreen at 14:19