I did it! I won NaNoWriMo 2012 and I feel epic (to quote a rather annoying British television commercial!) My final word count came in at a very healthy 50,055, which means that by the time I finish editing the manuscript, I will have a decent sized novel to pitch. Wonderful! I am also totally in love with the story, which is always a bonus. 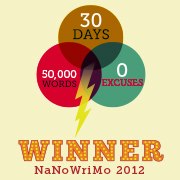 The month has been a long one, and it isn’t even over. NaNoWriMo 2012 was definitely harder than NaNoWriMo 2011. Perhaps this was because in 2011 I was writing the sequel to my debut novel and it was all clearly mapped out in my mind. Perhaps it was the fact that I then had a child under the age of 1, who was easily satisfied with a nap and some sensory toys. Whatever, this year was a tough one.

But I did it, and in just 25 days! I know there are many hundreds (and probably thousands) of other NaNoWriMo winners around the world, some who finished ahead of me, and to those I say hearty congratulations. To my fellow Wrimos who are still slogging at the final hurdles, do not give up. You will do this, and we will meet at the finish line!
Posted by SpookyMrsGreen at 14:06