Exciting Times for the Redcliffe Novels!

Hello my friends! I recently shared details of an upcoming promotion I was scheduled to take part in with Wattpad. For those who are not familiar with the website, Wattpad is an author platform that is designed to be easily accessible via mobile phones, tablet computers and other handheld devices. Authors can upload poems, novels and short stories to be viewed for free, and readers can collect the stories and make comments or vote on them as appropriate.

I first used Wattpad to share some of my unpublished short stories. They received very little interest, but they are part of my author portfolio, and this is a good place to direct people who want to sample my style of writing. I then decided to share the first 3 chapters of my Redcliffe novels Love Hurts and Love Kills. Again I received minimal attention, but they were there, and they could be seen.

This all changed when I was approached by the marketing team at Wattpad. They had seen my activity on the social networks, and invited me to partake of a promotion for my first novel Love Hurts. They proposed that I post the entire novel on Wattpad free to view, and they would schedule a day in which to direct some marketing towards it, and subsequently drive readers to my books. I agreed, we set it up, and wow, what a result!

My promotion took place last Wednesday, 12th March 2013. Up until that point I had registered 886 reads of Love Hurts (A Redcliffe Novel). I checked briefly on Thursday and was very excited to see the number of readers had jumped to 2,346. By Friday it reached 4,492, and late on Sunday the number stood at 7,076. Amazing! So, realistically, I could be looking at hitting 10,000 reads of Love Hurts (A Redcliffe Novel) just one week after it was featured by the Wattpad marketing team. Thank you Wattpad! 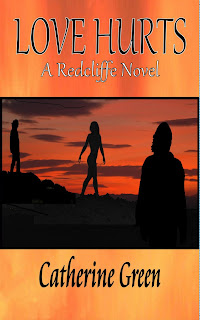 Aside from the number of people reading my book, I am collecting a steady stream of new followers of my Wattpad portfolio, and I have received some messages from readers telling me how much they enjoyed my book and will purchase and read the next two in the series. Score! Fellow authors, check it out. Wattpad is a good place to be! And thank you to my new friends, followers and readers of the Redcliffe novels. Welcome to our world!
Posted by SpookyMrsGreen at 00:00