I have been struggling with a manuscript for about the last six months, and so I decided it was time to get help. I turned once again to the good people at National Novel Writing Month. Since I managed to write 2 very pleasing novels during my NaNoWriMo events in 2011 and 2012, I thought I should try it with this one. Lucky for me, Camp NaNoWriMo is active throughout April. 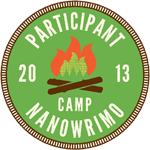 The manuscript in question hasn’t even got a title. My working title is The Vampire Hunter, but that doesn’t do it justice, so it will have to change. I began the novel with gusto, having received a flash of beautiful inspiration from my Muse while out walking by the canal one day. Then, without warning, my Muse went on holiday! How dare she! In fact, I think she might have emigrated. I have been receiving ideas for stories on the odd occasions when she shows herself, but with this novel, she seems to have left me to it.

The story is about a vampire hunter who lives on a canal boat. She travels the UK waterways, slaying vampires wherever she goes. Dr Jennifer Worthington works alone, having lost her previous partner during a hunt that went wrong. Her sole aim is to locate the vampire who broke her heart when she was at university, and to destroy him. During her quest, she discovers an ancient and powerful vampire who has a strange attraction both to and for Jennifer. 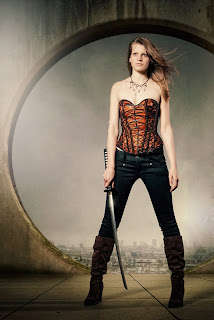 At this point in the story, I am about to head off into a whole new adventure on uncharted territory. Jennifer discovers that she has a history with the vampires she hunts, and it goes back centuries. We have elements of past lives, reincarnation, and even angels and demons lurking in the shadows. I just need to figure out how to bring them forward and integrate them in an exciting and enjoyable story. Camp NaNoWriMo, I need your help!

*Vampire Hunter image courtesy of Pinterest
Posted by SpookyMrsGreen at 00:00