Today I welcome author Jessie B. Tyson to my blog, to tell us about her debut novel which is on sale from 15th - 31st August as a special summer offer. 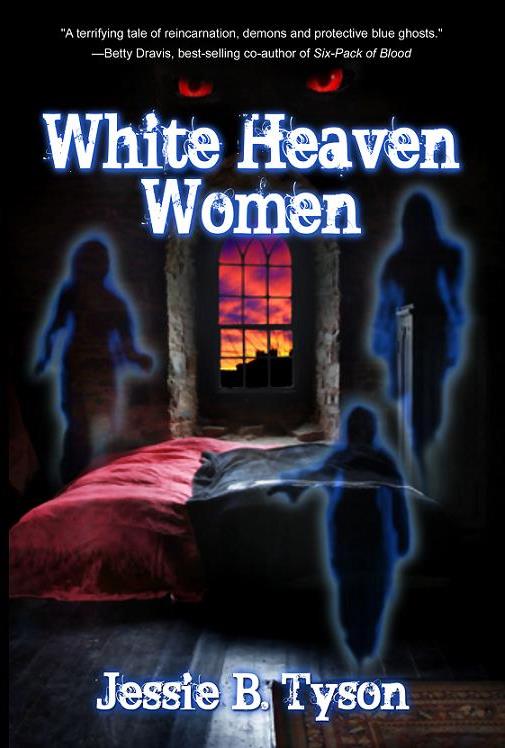 
WHITE HEAVEN WOMEN been in the top 100 paperbacks sold on Amazon Canada summer 2013!

It has also been #1 Suspense and Occult, twice!

Many people believe that we have all been here on earth before, with a different name, different life. Some live their current lives believing they’ll be reincarnated after death. This past life theme is prevalent in movies, television ad novels, including the new supernatural suspense White Heaven Women by British author Jessie B. Tyson.

White Heaven Women is a gripping tale set in Whitehaven, Cumbria, UK. Flashing between 1899/ early 1900s to 2000, readers are introduced to two sisters, Beth and Sarah, and the fate that awaits them.

In the year 1899, in Whitehaven, Cumbria, UK, Lady Constance Witherspoon, only 14 years of age, gives birth to twin girls during a tumultuous storm. Lady Elisa (Beth) is born with a diagnosis of demonic possession, while her twin, Lady Sarah, is crushed and killed when the ceiling collapses in the storm.

In the year 2000, Sally Witherspane returns home to Whitehaven and is haunted by relentless nightmares about demons and a baby crushed at birth. To discover the meaning of these dreams, she seeks the help of the local psychic, who instructs Sally to attend a past life meeting. It is there that Sally meets Beth Witherspoon.

Persuaded by a ghostly blue apparition, Sally documents a family history filled with deception, abuse and an ancient evil, and she must summon strength and faith to become the woman she is destined to be, one of the last descendants of the White Heaven Women.

This three minute You Tube video tells a true story why my ghosts are blue and not white like other authors spooks:-


Bio: Jessie B Tyson was born at Scalegill Place near Moor Row - a tiny village between the coast and the mountains in N.W. Cumbria England but lives in British Columbia, Canada. In what year? She's a senior and will not divulge that - ladies prerogative but she will be collecting a pension in a few years (grin.) She was educated in her natal area and moved to Canada in the year 2000. Jessie wrote children's and fantasy stories as a teenager. When she matured she moved on to writing adult stories. She has a great imagination and enjoys turning her vision-like dreams into enjoyable tales. Jessie considers herself as a Spiritual Christian who believes in the Power of God - but that doesn't stop her writing paranormal fiction with ghosts and demons! Jessie has a wonderful sense of humour, and loves to laugh and tease her friends. She has a generous spirit and will help anyone in need. She has an affinity with animals, especially dogs, cats, horses and dolphins. Jessie abhors all forms of cruelty to any living breathing creature. White Heaven Women is her debut novel.

You can find Jessie in the following places: