This was one amazing night!  Let me begin by setting the scene…  After a few wrong turns I finally arrived at the Toby Carvery Pub known as The Watermillock.  The large building is imposing to look at and has gargoyles above the front door in true Victorian Gothic style.  Yet there was something warm about it; the colour of the brick, the large windows with a glimpse into the warm, cosy interior and even a black cat sat in an upstairs window watching people coming and going.  So I stepped inside… 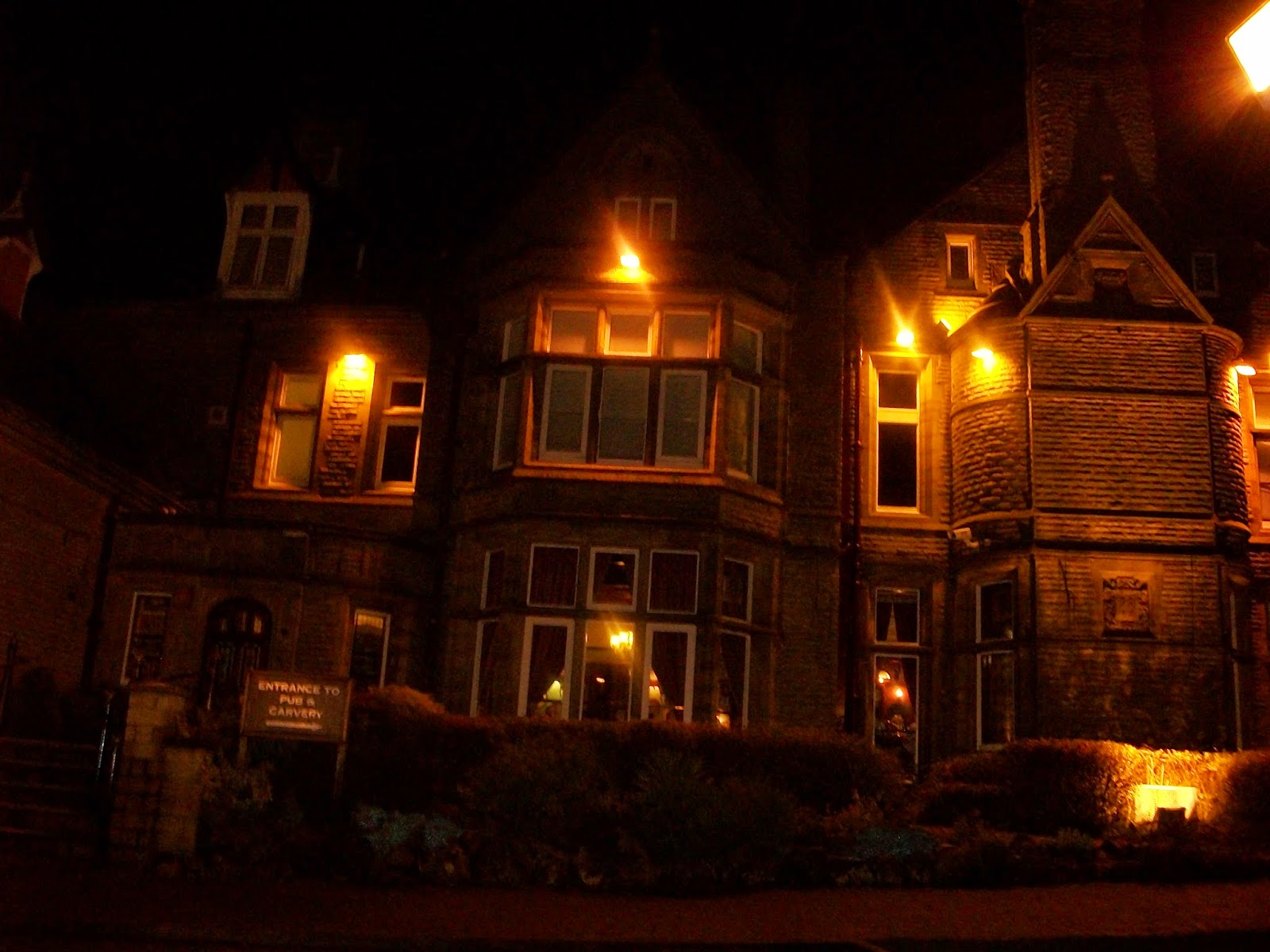 Our first vigil was on the first floor and we began using a planchette on the tiled floor of the landing area.  The planchette is a divination tool.  Quite simply it is a wooden board on wheels, with a hole in the middle through which we push a pen or pencil.  We then place the apparatus onto a large piece of paper, each person will rest a fingertip on the edge of the board, and we will ask for a spirit person to come forward and speak with us.  The spirit will then use our collective energy to push the board around the paper to either write a message or even just draw a picture or symbol.  Sometimes they will simply move the board to answer ‘yes’ or ‘no’ to questions. 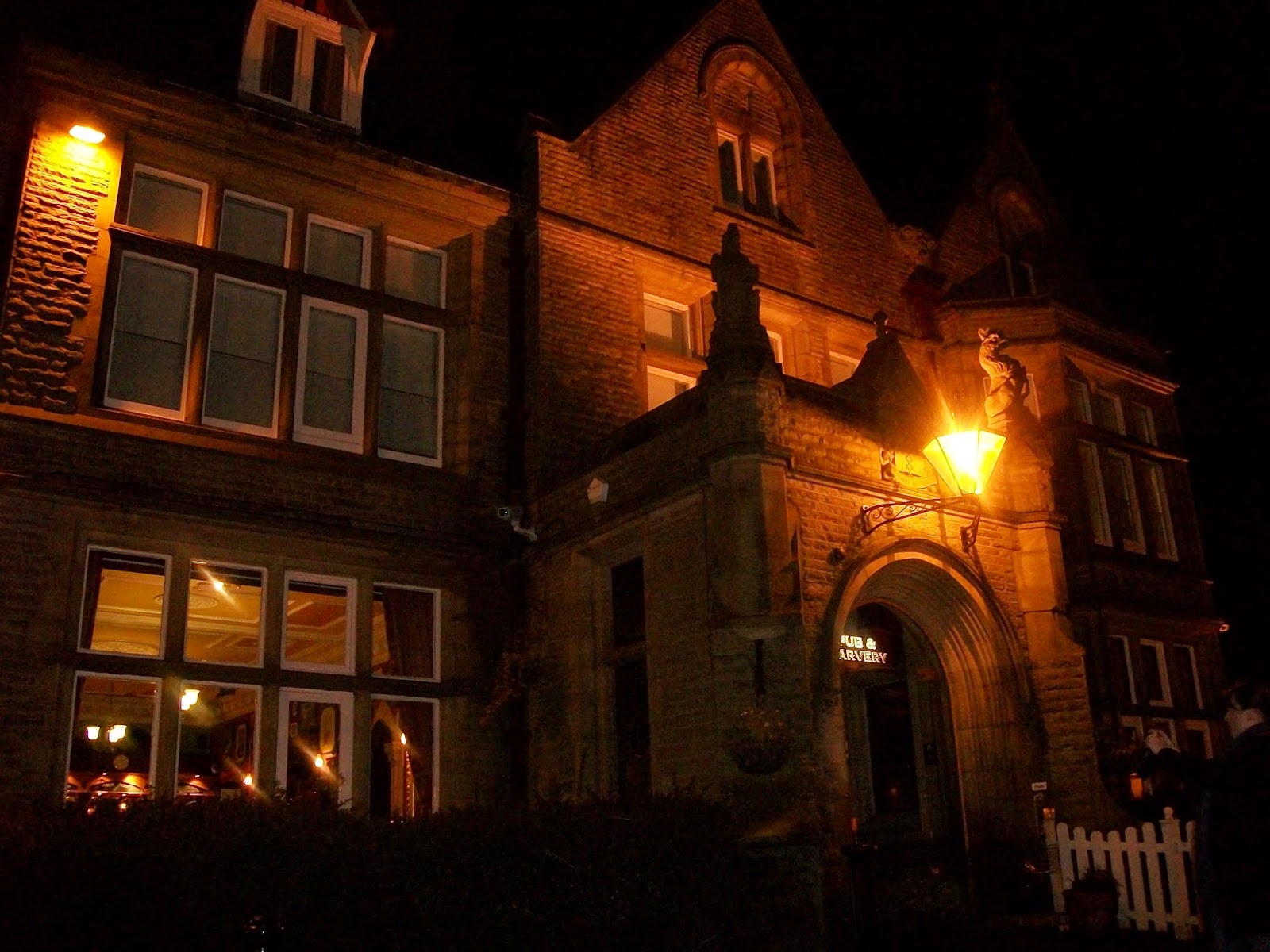 During our walk round I had seen a small boy walk across this area and peer into the room where we were sat and I was hoping he would come and speak to us.  He didn't but we soon had a response from a man who identified himself as Herbert, grandfather to John who was in our investigation group.  Herbert had been a soldier injured in WW2 and was brought to the Red Cross hospital in this building in the mid 1940s.  He was very strong and seemed only to want to reassure John that he was still with him, but he was very private and wouldn't answer any personal questions.  He did say there were other spirits in the house but none of them were able to speak to us at the time. 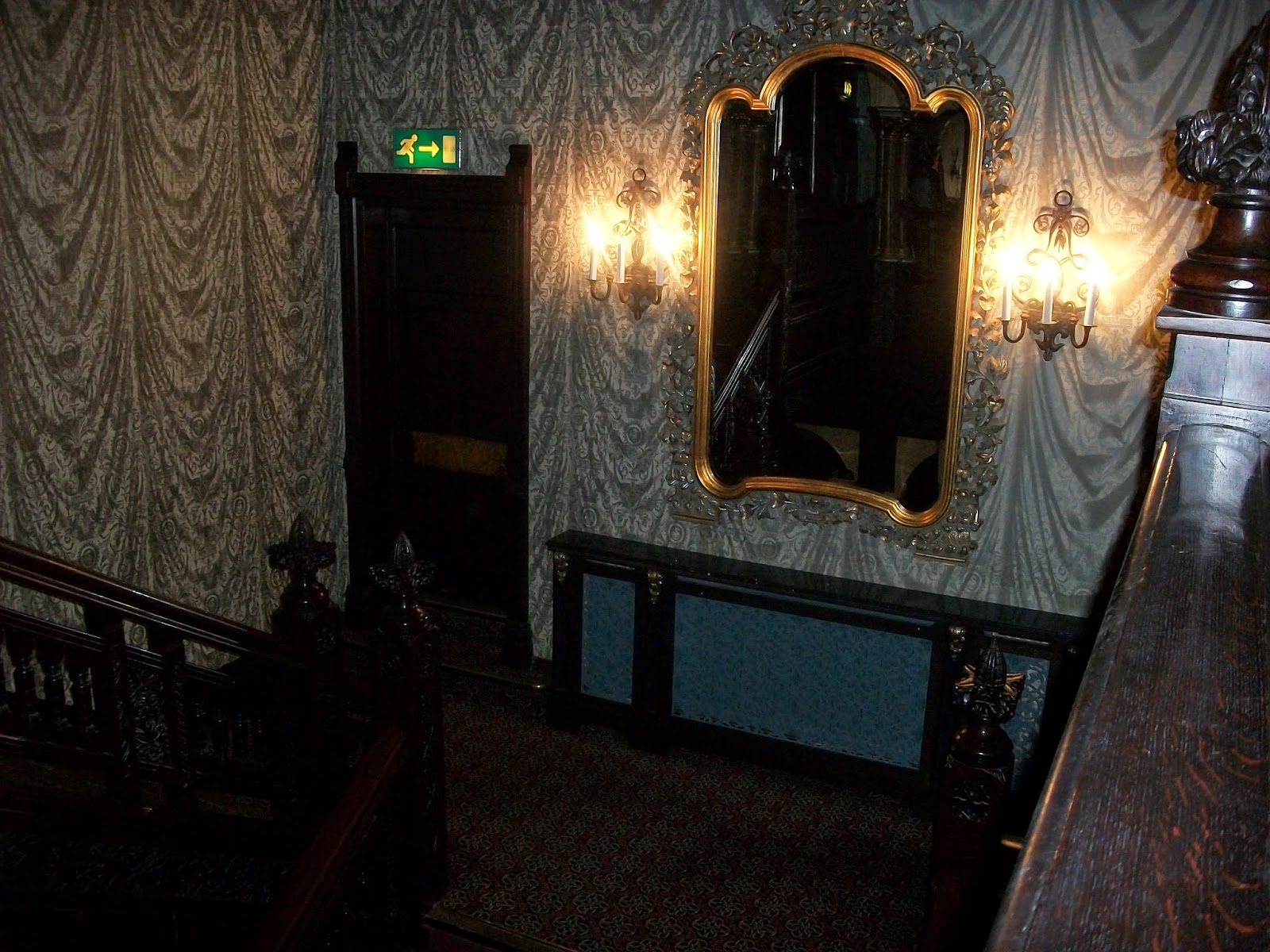 The second vigil was a whole new experience for me as a ghost hunter and I will never forget it!  We moved into the cellar and into a disused room that Lorraine (the medium) had felt very uncomfortable in during our walk-round earlier in the evening.  At the time I hadn't felt anything unusual, which in itself confused me because I generally feel very anxious in cellars and enclosed spaces.  But as I walked down the stairs from the ground floor I had a sudden strong feeling that someone would try and push me down even though there was nobody behind me.  Then when I turned the lights off for us to begin our vigil I had a strong urge to run back upstairs to safety, I did not want to enter this room! 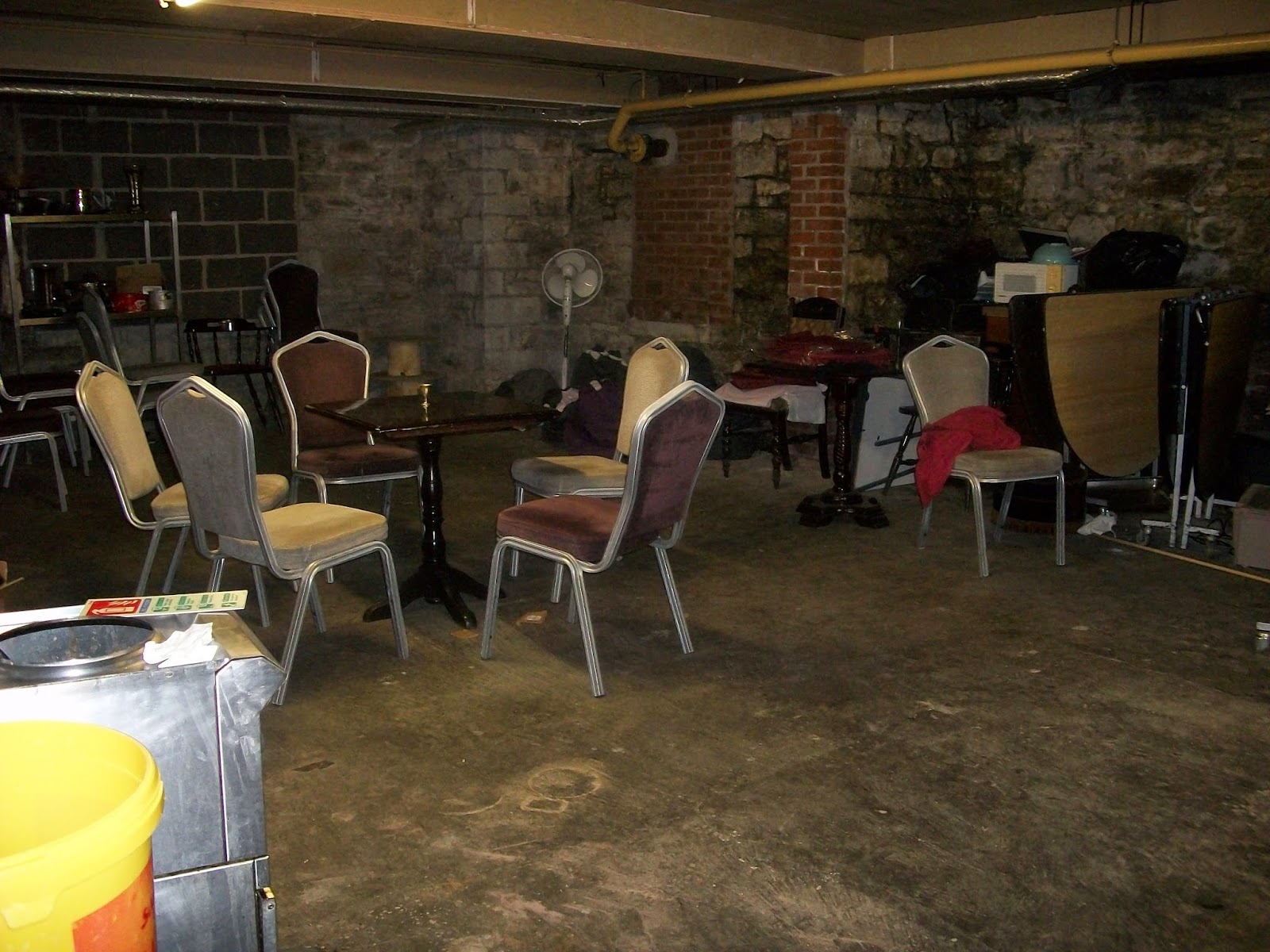 We moved in and sat down around the table but each of us huddled into our chair and was very nervous of the unknown energies.  I even had to ensure I sat on a high backed chair rather than a stool because it felt safer.  We used a glass in this room because it seemed appropriate.  By ‘using the glass’ I mean it as a method of divination to communicate with spirits.  We ask questions and the glass is moved around the table to indicate either ‘yes’ or ‘no’ in answer.  The energy is raised by each person in the seance circle placing a fingertip very lightly on the edge of the upturned glass, so that the spirit person can ‘push’ it.  We very quickly got a response in here.

Through questioning we met 17-year-old Gertrude, who was very strong when moving the glass.  She seemed to attach to Maggie in our group because she felt safe with her.  Gertrude told us that she was alone in the cellar and that she had been brought to the hospital in 1943 having been fatally injured by a trusted male friend.  He had apparently proposed marriage to her and when she rejected him he became angry and hurt her.  Then he took her to the hospital where she died on 10th December.  At this point the glass was moving very forcefully around the table as Gertrude demonstrated her loneliness and isolation, and Maggie started crying almost to the point of hysterics as she became involved with the spirit.  We then asked Gertrude if she needed our help and she said yes, The glass was almost flying in circles around the table.

I went upstairs and asked Lorraine if she could come and help us and she knew instantly that it was a young girl that we were communicating with.  She came into the cellar with me and proceeded to help Gertrude move into the Light (a mysterious other realm that I am not familiar with), where she was reunited with her long lost brother.  The emotions and the energy I felt during this particular seance was so intense I was left exhausted, as were the other members of our group, but we felt so much better once we knew Gertrude was in a safe place. 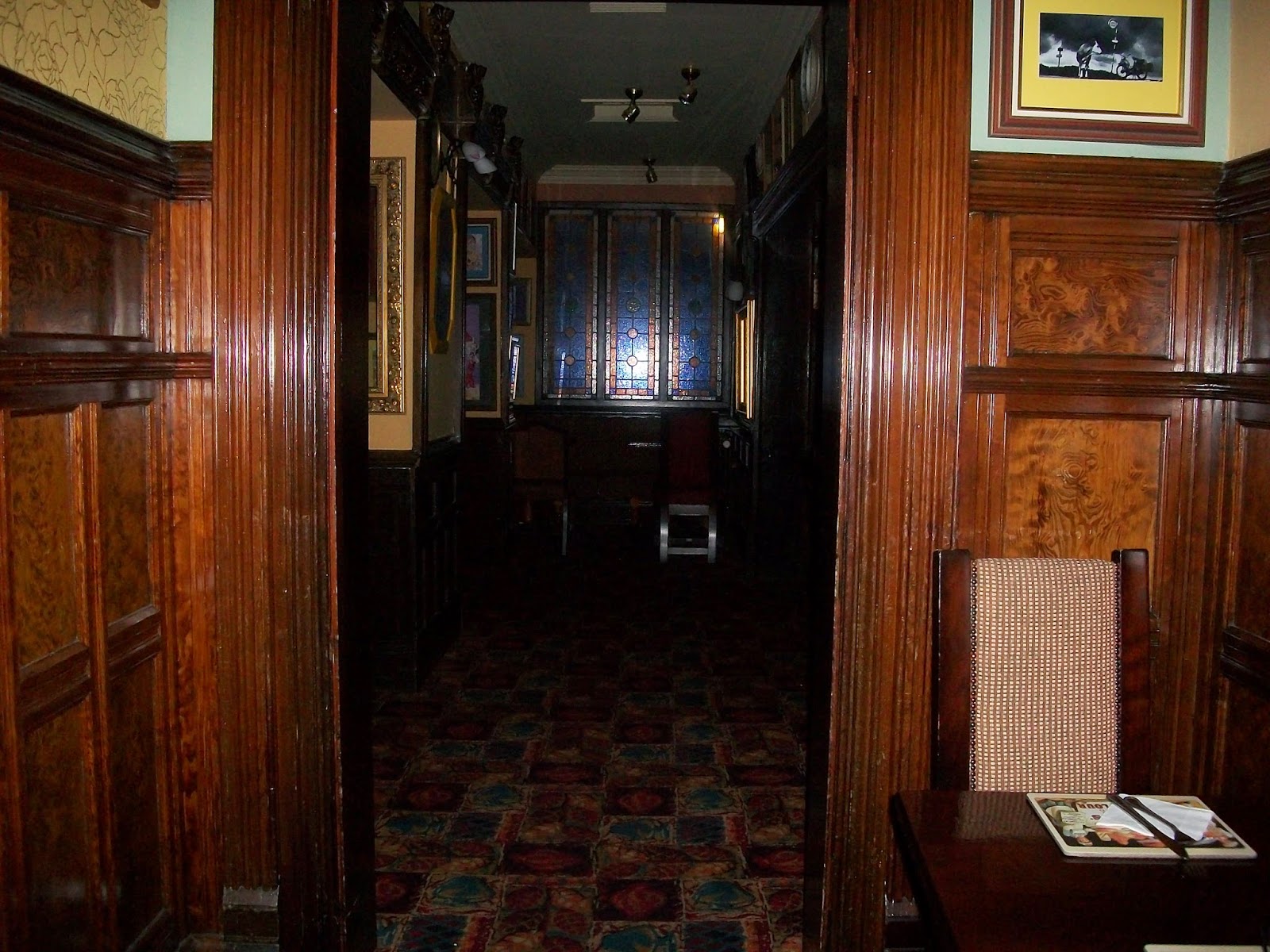 Lorraine suggested we move into the next large room in the cellar, which is used as a staff room.  The atmosphere in here was much lighter and there was no sense of oppression.  We then attempted table tipping with almost instantaneous results!  It was a square table, which had a small brass goblet on top.  The table tipped almost vertical and the cup never moved until I commented on it to ask if it was stuck in place.  Then the table was lowered, paused and tipped again and this time the cup fell off.  Lorraine laughed and told us it was a young boy who was playing with us and we did feel very jolly and happy. 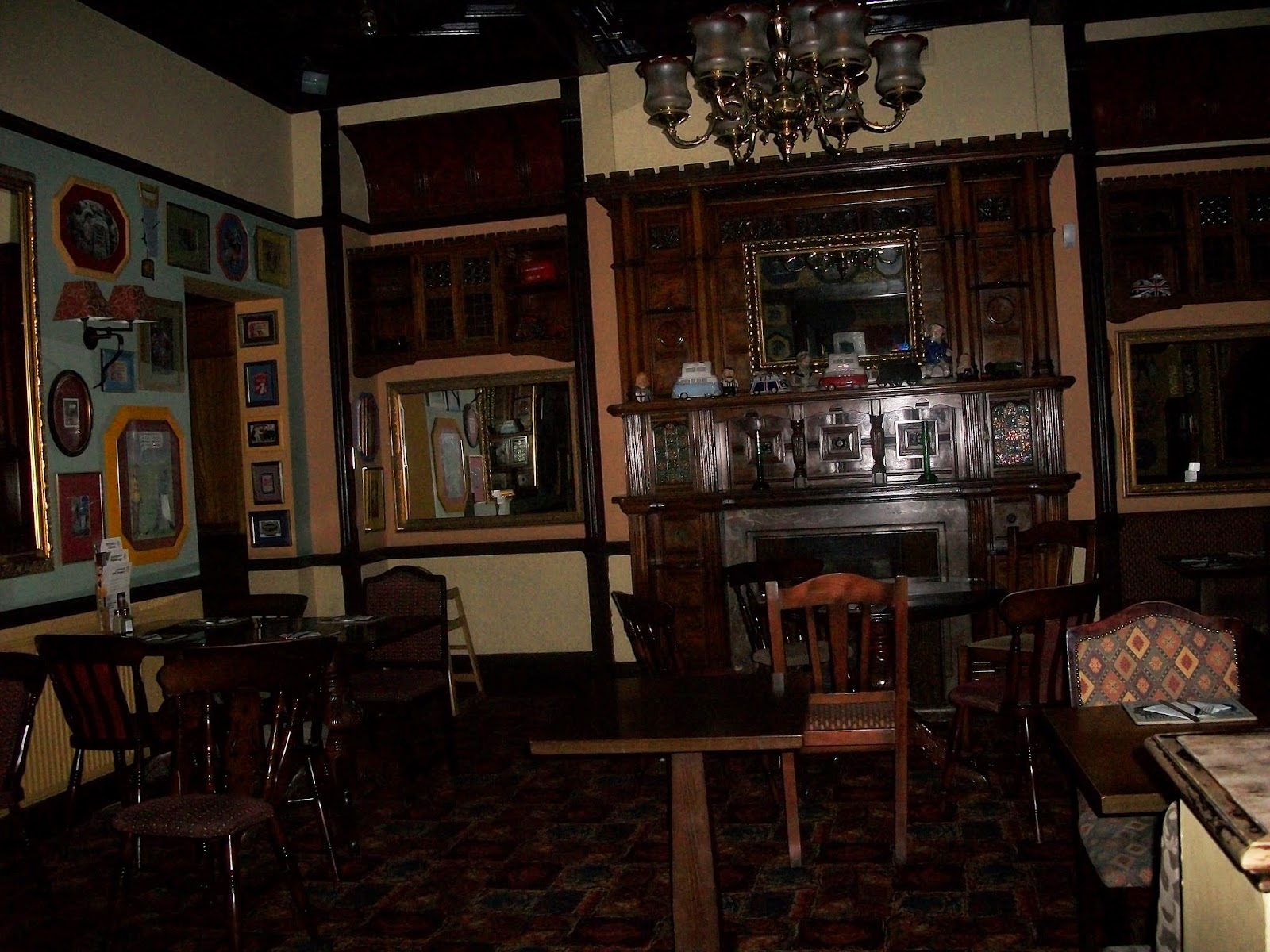 Finally we came to our third vigil, by which time we had had quite enough strong energy and were ready to relax a little.  We sat in the large ground floor restaurant area towards the rear of the building, and it felt very homely and strangely comforting.  A few of us commented that we could quite happily curl up on the floor and fall asleep knowing that we were safe and protected.  I had a vision of the room filled with warm candlelight and people laughing and chattering together while a huge fire roared in the grate.  Lorraine felt that this part of the house would have been separate to the hospital and that the family life was very happy and comfortable.  While I was sat at a table on my own I became aware of my Yorkshire Terrier dog, Toby, who had passed away 18 months ago.  He padded towards me as he used to during life, and I felt him jump up and put his front paws on my knee while he asked for a fuss.  At the same time I felt a strong cold draft across my knee even though the room and the rest of my body was warm.  I was greatly comforted with this and was aware of Toby lying by my foot relaxing. 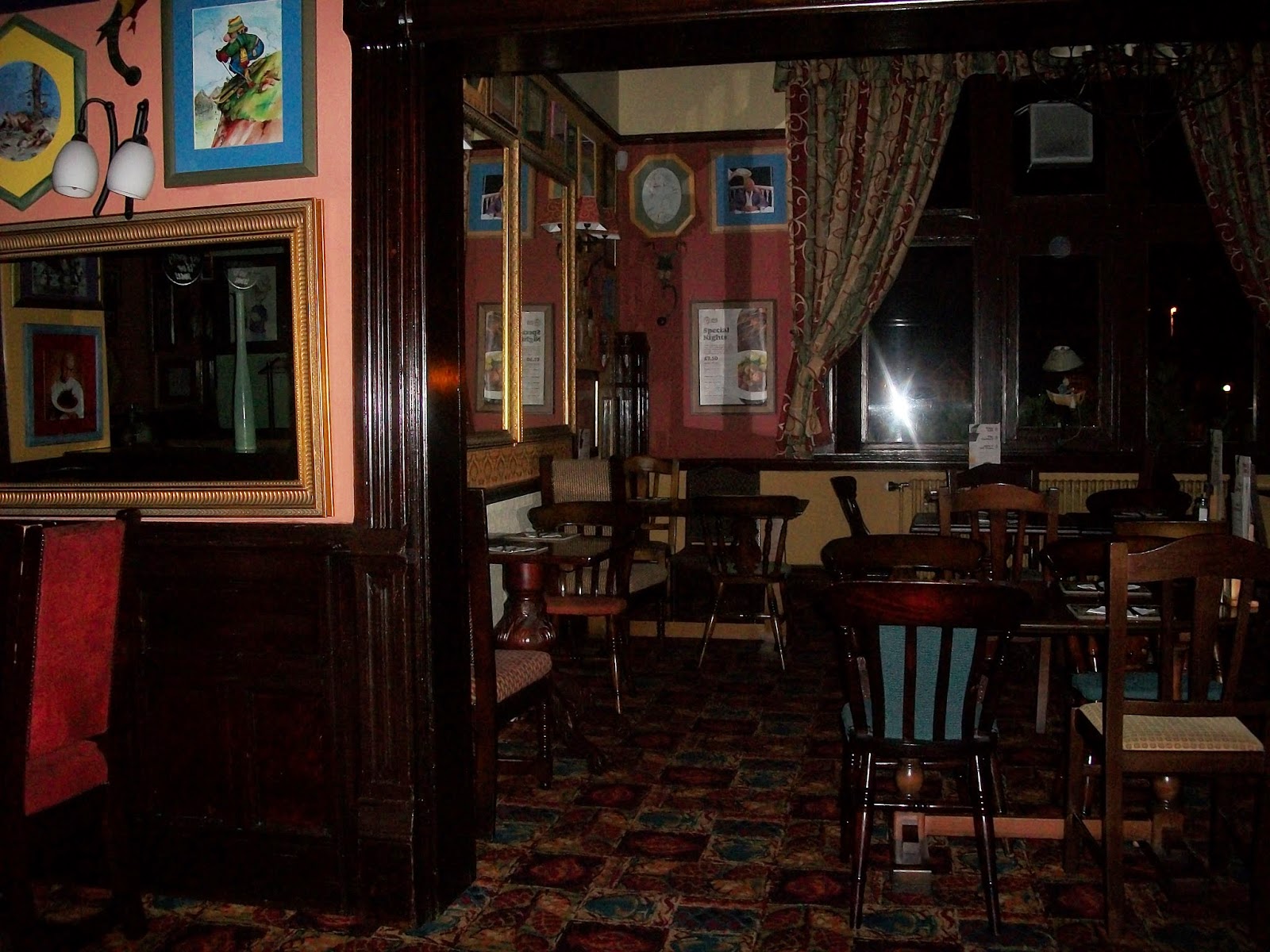 I was very surprised to learn that ours was the only group who experienced any strong activity during our investigations.  The whole house seems alive to me and I cannot wait to return and see who else we can speak to!  It is wonderful to know that we leave a little of ourselves behind when we pass over, because to communicate with Spirit is to have history come alive and to know that there is always something more, something beyond our physical Earth realm, just waiting to be explored when the time is right.  And this is exactly what I felt in The Watermillock; history from its past inhabitants, families, patients, doctors and any number of other people with stories to tell and memories to share.
Posted by SpookyMrsGreen at 00:00