Wow!  This was one epic and exciting ghost hunt!  Bodelwyddan Castle is beautifully kept and a fantastic museum and antique centre.  And they have a second-hand bookshop in the grounds!  I could feel the Spirit energy building as I drove to the venue, and it felt excited, as though the ghosts were ready to play... 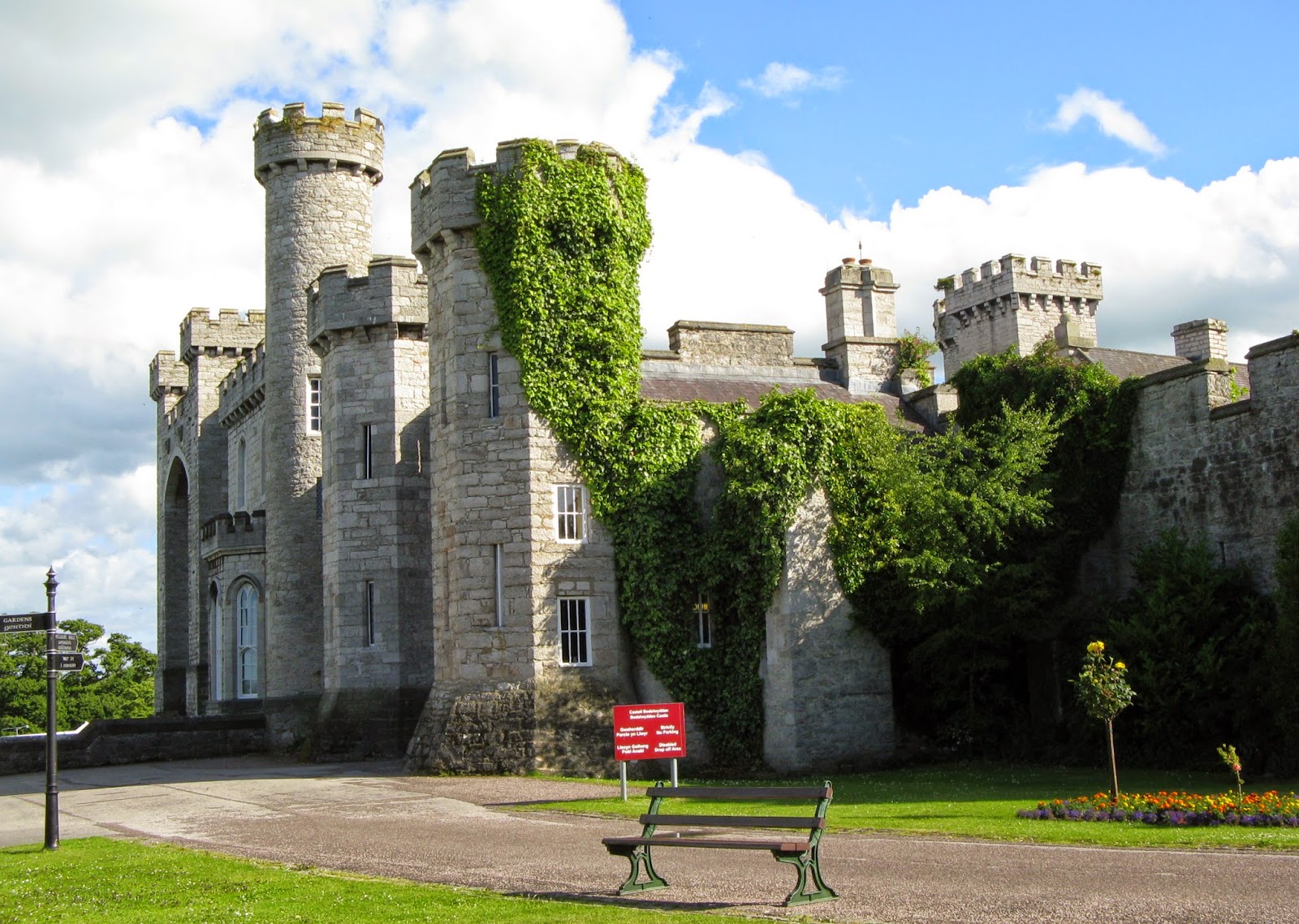 On the walk round I felt dizzy in the hallway by the main staircase.  I knew that it was an active area but couldn’t connect with any of the energies to identify them.  The Library was a very masculine room, both in décor and the general atmosphere.  The Dining Room felt more welcoming and a bit more feminine-influenced.  In the bedroom I sensed a female spirit who was a very pretty and delicate lady and she was immensely proud of this room.  She wanted us to admire it because it was modern and stylish.

In the Library we spoke to Alfred, his brother Thomas, and a man who called himself Jeffries.  This was all done using the planchette.   Jeffries said he had murdered Thomas out of jealousy and he wasn’t remorseful.  In fact he seemed quite proud of his crime.  Jeffries was very strong and he moved the planchette across the table so it had two wheels hanging over the edge.  Then he moved it around the edge of the table but he lost it on the corner and it fell to the floor. I had never experienced this kind of movement before and was very impressed. 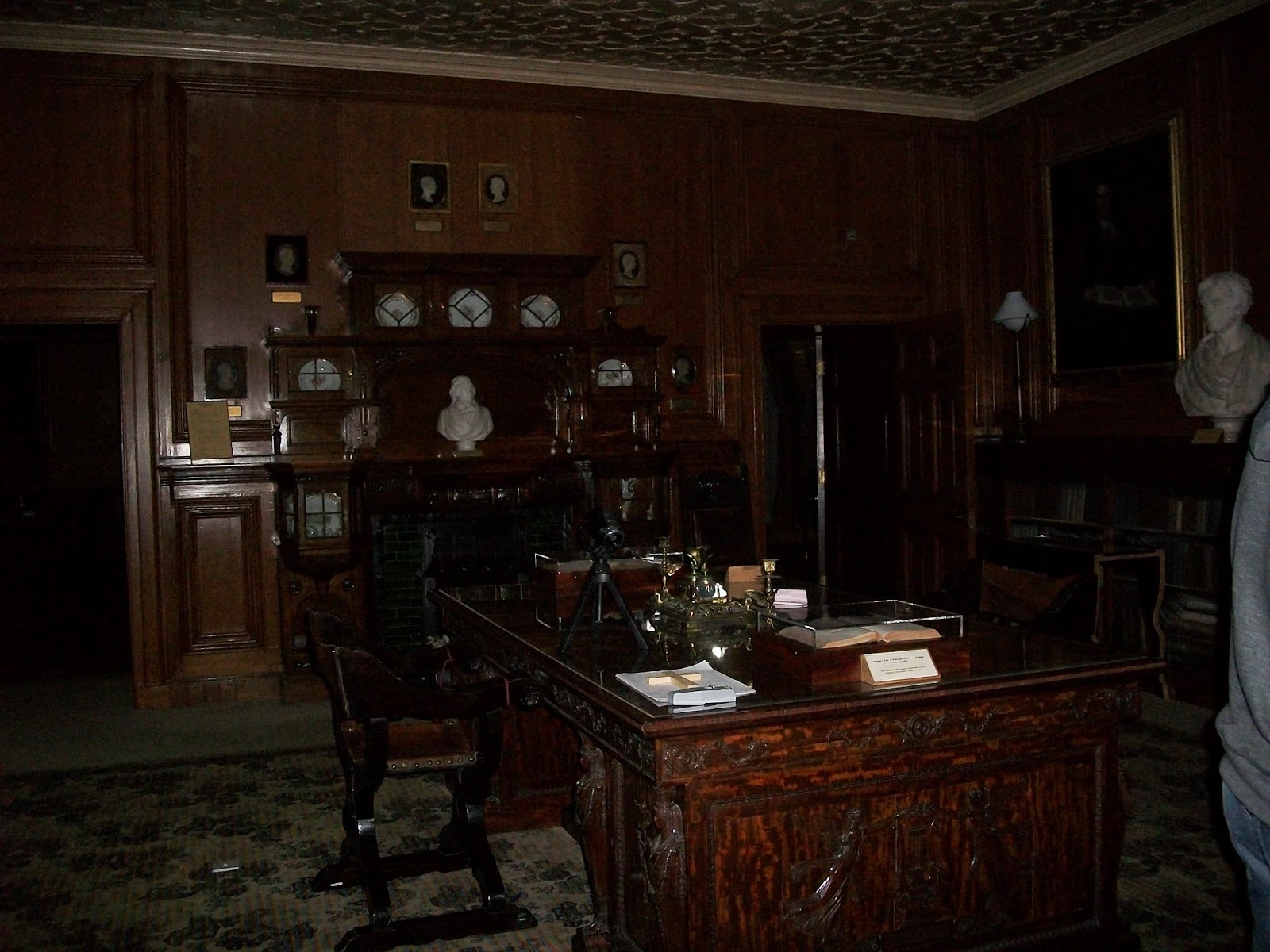 In the Dining Room we set up the glass and spoke to Margaret, who was Alfred’s wife.  She seemed very gentle and pleasant and told us she had three children, Alex, Jonathon and Alison.  We were about to ask her some more questions when Alfred came in and took over the glass, advising us that he had sent his family away and we should speak to him!  He was very protective and I got the impression he was well loved and respected by his wife and children, and vice-versa.

After that we spoke to George, who came across as a portly, jovial 18th Century gentleman who enjoyed his brandy and the ladies!  His son Henry also came onto the glass but wouldn’t speak to the women in our group.  He only answered questions from a man. Apparently George had a mistress and an illegitimate daughter and it destroyed the family.  As a result of this Henry blamed the mistress and subsequently mistrusted women.

We then spoke to Bernadette, the illegitimate daughter.  She said we could call her Bernie, and explained that she and her mother were banished from the castle after the truth of George’s affair came out.  Bernie’s mother resented her for spoiling everything and she had an unhappy childhood as a result.  We felt really sorry for Bernie!  But then she said that she had been happily married and had children of her own.  We even sympathized with Henry after he told us the story and he gradually began answering questions from one of the women in our group.  After a while we felt the strong presences of all these Spirits surrounding us and it made us feel quite uncomfortable so we ended the vigil and went for a break. 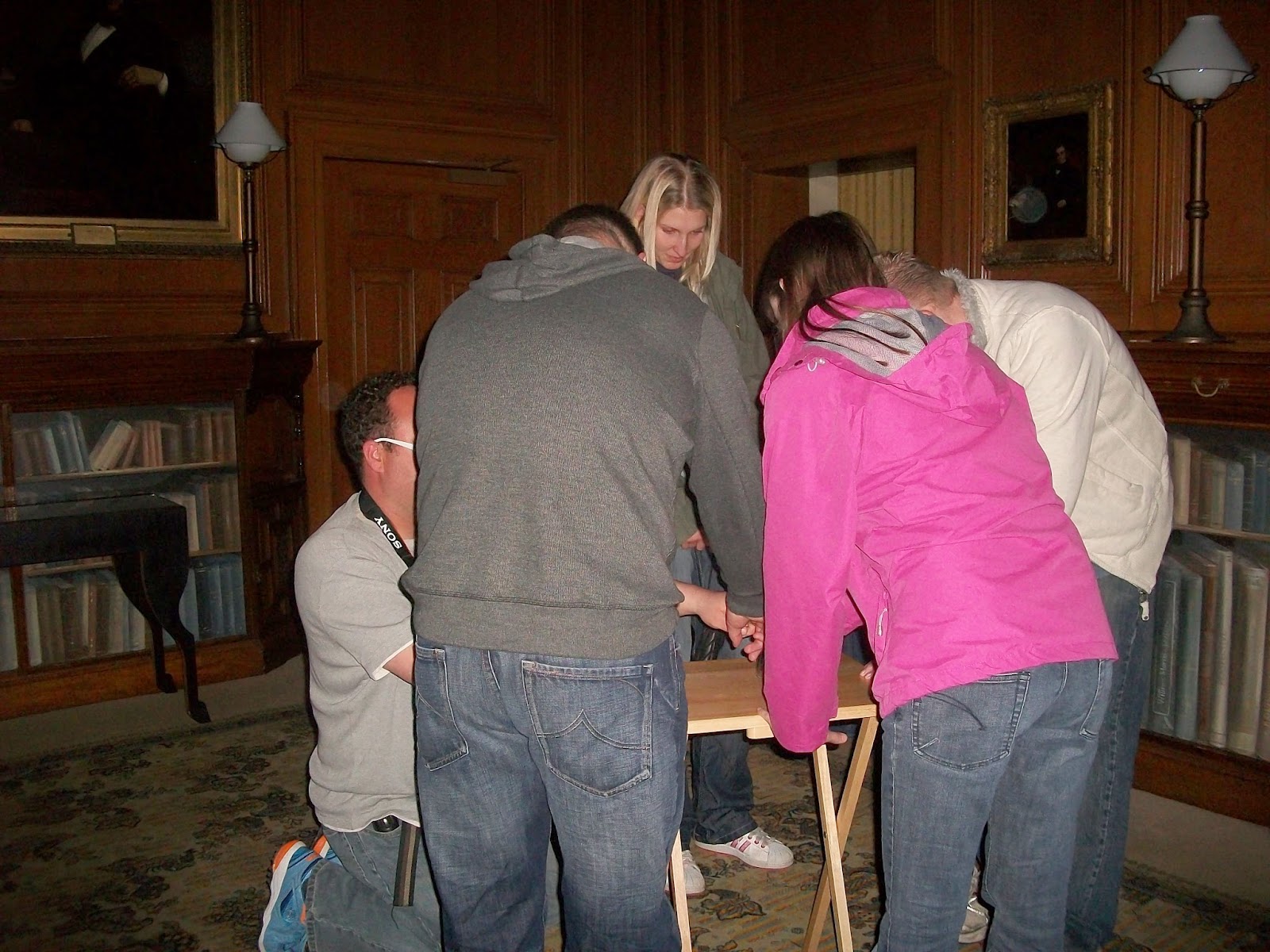 In the rear hallway we sat on the floor to try some EVP and Pete (Medium) became overwhelmed by a drunkard gamekeeper called James.  This man affected a couple of women in our group by making them feel dizzy and one even smelt alcohol fumes.  Pete then said that James was having lewd thoughts about us!  He had been a hard worker and a hard drinker during his life but he seemed harmless enough.  At the end of the hallway was a sofa and I could see a man sat on it watching our group.  He wasn’t the gamekeeper; I think he was a gentleman, but I could get nothing from him.  He was simply observing but didn’t want to interact.  I also saw a lady in the hallway stood near our table.  She was curious about us but wouldn’t come any closer because she was afraid of James and what he might do.  She was tall and slender, with brown hair worn in an up-do, and she was wearing a pale blue dress.

We moved into the main hallway and found the other group with a tipping-table.  Paul (Medium) had contacted five young children and 14 year-old Patricia.  We started singing Ring O Roses and the table actually moved in time to the nursery rhyme!  It was amazing!  Then someone suggested we try a different song and the children joined in with Row Your Boat!  I was so impressed and excited because I've never seen this before and it was such a fantastic experience. 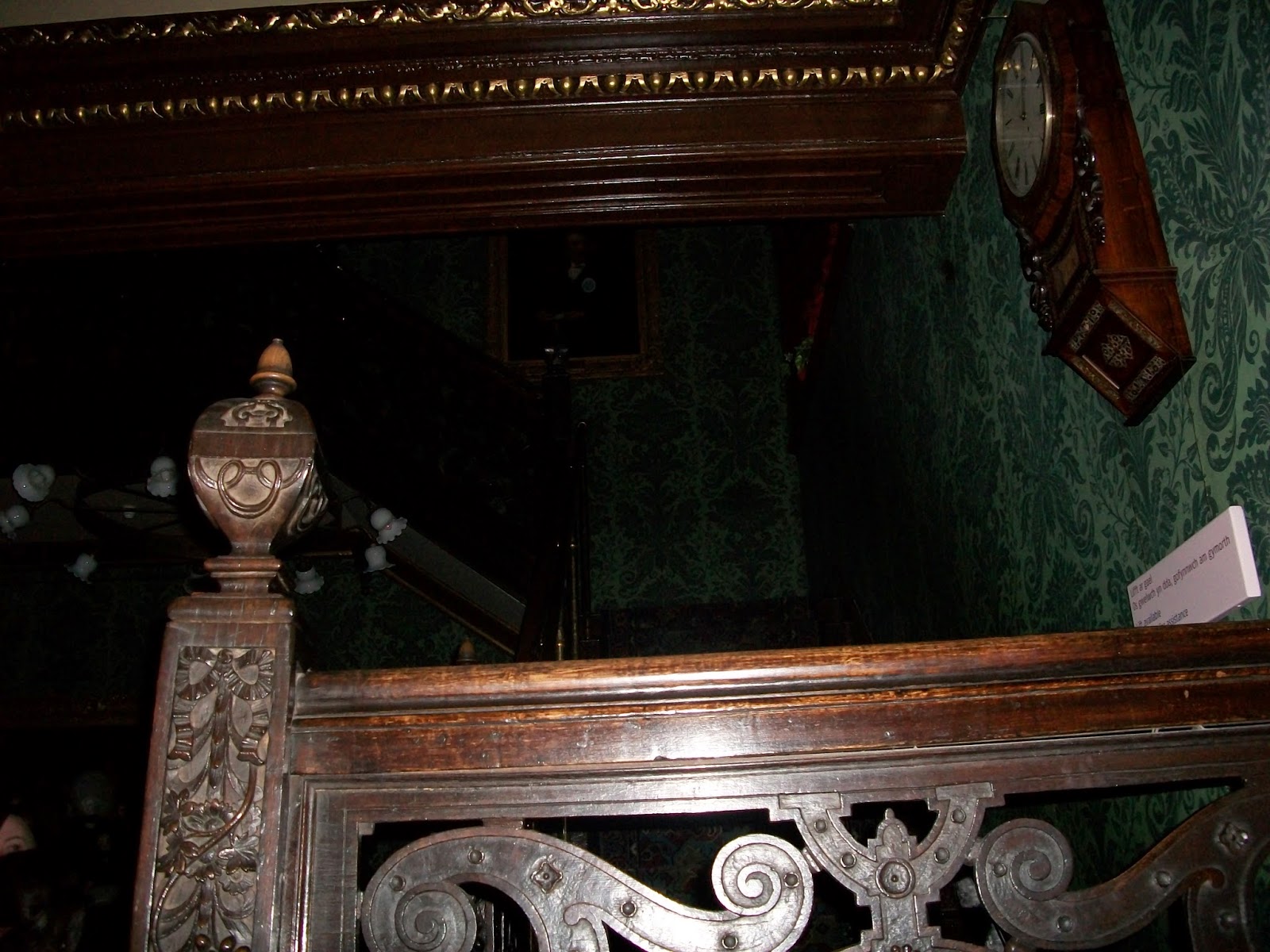 Later on we were doing EVP in the bedroom and we heard the sound of one of the toys being played in the Toy Room upstairs.  Two people went to investigate and couldn't explain how it had happened.  We all hovered on the landing for a bit but it was quiet and when we moved away we heard it again, it was eerie!

In the cellar we had been told there was a man who had been affecting people in the other group earlier that night.  He is apparently a very mischievous Spirit who had tormented many people over the years to the point where the Bodelwyddan staff refer to him as ‘Cellar Man’ and are used to his presence!  So we went in search of him.  He moved the glass a little bit and said his name was Matthew but we didn’t believe him.  Eventually we got bored and left him.

Finally we spoke to Mary using the glass in the Library.  Apparently she was George’s sister and they were cousins with Alfred and Thomas.  Mary was married to Timothy and her children were Anne, Emily, Laura and Giles.  She seemed very happy and was strong and talkative.  In fact it was dawn outside when we finished speaking to her!  Mary told us that George’s wife was Margaret and his mistress was called Lillian.  Mary and George also had a sister called Caroline.  Mary also told us that the man in the cellar was called Harold. 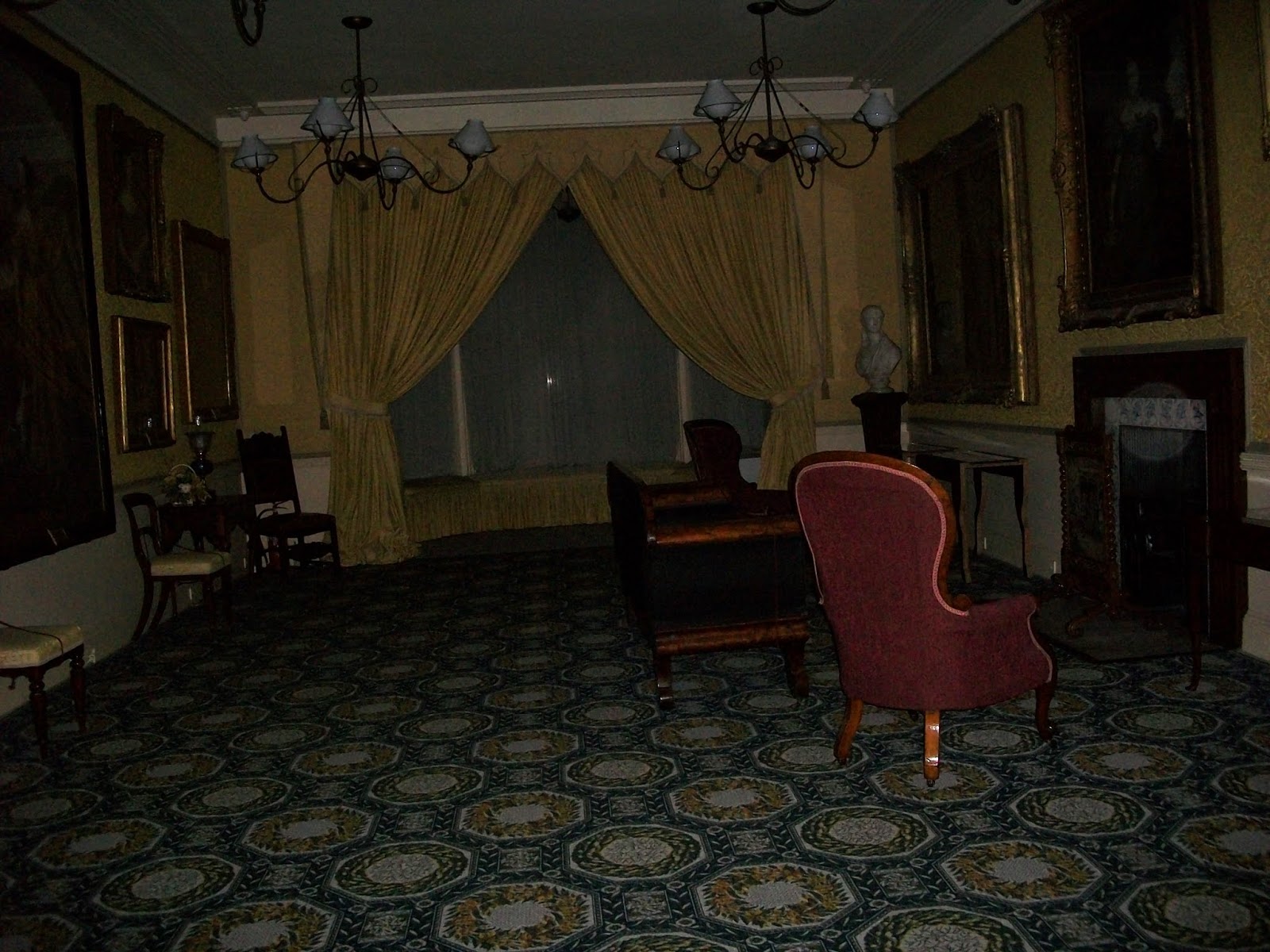 Bodelwyddan Castle is certainly a home with a rich history and a large family.  I think we could compile a whole biography from these spirits if we were to return with a list of questions…
Posted by SpookyMrsGreen at 00:00