First of all thank you very much for taking part in my Blog Tour for Angelic Business 1. Pink Matters. Reader, don't worry, I'm not here forever, just twisting the arm of your favourite blogger and borrowing a bit of space. 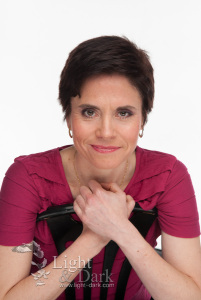 My name is Olga Núñez Miret and I’m a writer, translator, reader, psychiatrist, I love movies, plays, fitness, owls and recently have taken up meditation (mindfulness). (I thought I might as well summarise and not take too much of your time). I'll leave you some links at the end just in case you want to find out even more about me (I'm not sure I'd recommend it, but hey…do your worst!).

I've been writing since I was quite young and I write in whatever style the story I have in my head wants to be written in. So far literary fiction, romance, YA, thriller…and a few unfinished works.

Around five years ago I discovered and read quite a few interesting Young Adult books and had an idea for what I thought could be a series. At the time I wrote the first of the novels and after trying to find an agent or a traditional publisher without much success, I started self-publishing, but decided to publish some of my other books first. Since then I've published 12 books (6 original books and their translations, as I write in English and Spanish).

I kept thinking about Angelic Business and a few months later wrote the second novel in the series: Shapes of Greg. (No, nothing to do with…)

And last year, as part of NaNoWriMo I wrote the third novel in the series, Pink, Angel or Demon?

As I had written the three, I thought I'd publish them pretty close to each other so people wouldn’t have to wait to know what happened next (at least not too much).

The three books in the Angelic Business collection are now available for pre-order at the special price of $0.99 each. It’s a bargain price and they'll go up shortly after publication.

Don’t worry. My writing is better than my video-creating skills, but as I’d been taking all those pictures of angels, I thought I might as well. 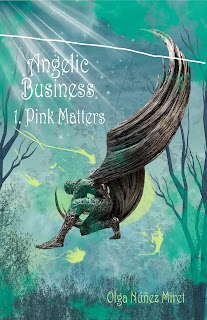 You are Pink, not the prettiest girl, but smart and with plenty of resources. What do you do when your best male friend offers to have sex with you, because he thinks you’re a lost cause? You plot your revenge with your two best female friends, of course!

It seems you're in luck when a new and mysterious student appears. And, to top it all, he seems interested in you too. He could take part in the plan. But then, he seems to have a plan of his own… He insists he’s not just an ordinary boy. And what seemed so easy to begin with, gets more and more complicated when Heaven and Hell come knocking at Pink’s door.

Pink Matters is the story of Pink, a 17 year old girl, good student, articulate and smart. What she has never been the centre of attention or made the top ten of the most popular and attractive girls at school. When two guys, both claiming to be angels, insist that she is, indeed, ‘special’, fight for her attention and help and tell her she is the key to the future of the universe, she can't help but ask: Why me?

“Who are you?” Lorna asked. Before she could say anything else, she froze as if paralysed. And the same happened to Sylvia.
“Oh no, not again” I said.
“Hi Pink. I’m Azrael. I’m…”
“Let me guess...You’re an angel.”
I could say he smiled but it was more like a white light radiating from between his lips. His voice also seemed slightly “otherworldly”. He was nothing like G. Flesh and blood didn’t seem to be his priority.
“Yes. I am.”
“O...K....And...to what do I owe the pleasure of your visit? If you are going to make an announcement of some sort...I could have done with some notice.”
The light now seemed to radiate from his whole “body” if that was what it was. Somehow his show was much more believable than G’s. And scarier.
“It’s not an announcement as such. But you should know...G...”
“Yes?”
“I know he told you he’s an angel.”
I looked at him. Maybe he was different to G but he could be as annoying as him. And interfering.
“Yes. I also “know” things...In my case it is because “I” am an angel. He has not been truthful about his identity.”

In case you’re intrigued, I leave you the cover (reveal!) and links to the other two books: 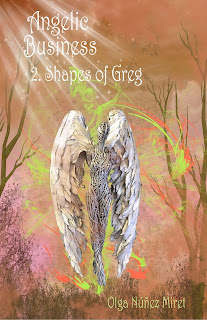 What more could happen after the death and resurrection of your mother? What could Heaven and Hell toss at Pink to top that? Well, to start with, she gets a new hellish babysitter, who is seriously hot. And although everybody likes him, he only has eyes for her. When she learns what the price was for the ‘miracle’ of saving her mother, she realises that she must be careful, as Hell doesn't lose gracefully.

One of her friends wants to find the perfect man, the other one gets into a relationship she refuses to talk about, there’s a demon who doesn't know when to give up and an angel who seems to have his own agenda. What on Earth, Hell or Heaven is going on?

Shapes of Greg is available for pre-order and will be published on the 15th of July.

And last, but not least: 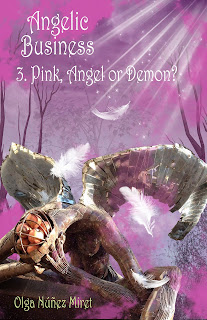 OK, OK, OK. Pink gets it. She’s the Elected, whether she likes it or no. Heaven and Hell are closing in, and their envois are closer home than ever. So close she can’t ignore them. And she’ll do everything but.

However long she has, she’s determined to make it count. She'll sort her friends out, she'll help her family and, she'll live a bit. And then, she'll take charge. Because no one will say that Pink went down without a fight. However big and bad the enemy.

Gender benders, romances, old loves that come to fruition, new challenges, divine interventions, tears, laughter and magic. All of that and more. Because, if you're gonna go, you might as well go with a bang.

Pink, Angel or Demon? is available for pre-order and will be published on the 30th July.

You can find me in the following places:

My blog is: http://OlgaNM.wordpress.com

I am also on Goodreads; Google+; Pinterest (Don't miss my board about angels); Wattpad

Thanks so much for allowing me to visit and post, thanks so much for reading, and as I always tell them in my blog, if you’ve found it interesting, like, share, comment and CLICK! Oh, and I love reblogs! Ah, and thanks to Lourdes Vidal for her covers.