I got the idea for my Historical Romance novel, Seduced By An Angel, when I bumped into a psychic at an antique store.

She was wandering around the showroom, “touching” furniture and reporting the various scenes from the past that she psychically observed (weddings, children reading school books, couples dancing at Christmas parties, etc.)  She explained that she was learning to fine-tune her gift of “psychometry.” When she touched man-made objects, she could see their owners “through time” and peek into their lives.

I thought, “Oh my gosh, I HAVE to write a story about that!”

So in Seduced By An Angel, outlaw Jesse Quaid (who is part Cherokee,) has a dream from Great Spirit that Sera Jones can clear his name of murder. Jesse can’t imagine how a 19-year-old preacher’s daughter can help him, until he learns that Sera has visions about the future and the past.

Because Sera is terrified of her visions, Jesse has to teach her how to accept her gift before he can persuade her to help him clear his name.

Seduced By an Angel is part of my award-winning Velvet Lies Series (which is on sale.) If you like Historical Romance novels with bad-boy heroes, adorable baby animals, mischievous orphans, and a slice of Victorian America, you’ll enjoy this bestselling series. Here’s an excerpt from Seduced By An Angel. 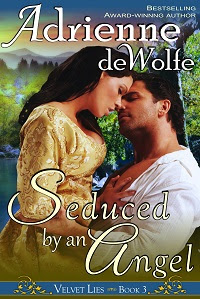 (Set-up: Sera is in a “haunted” part of the woods, where she is hiding from outlaws.  While communicating with a Native American ghost, named Hiawassee, Sera begins to have visions.)

Sera was walking behind a waterfall in a kaleidoscopic haze of color. Through the cloud of rainbows that swirled around her, she could see isolated pockets of horrific scenes: Jesse getting lynched. Or shot. Or bludgeoned.
*From any one point in time, there's a minimum of three futures,* the ghost of Jesse’s grandmother whispered in her ear. *You can stop the madness. But first, you must stop the outlaws.*
Sera felt numb. Insanely calm. She didn't doubt her visions. She didn't question Hiawassee. She merely followed the Medicine Woman's spirit as it glided before her, sweeping along a tunnel.
Flickering water reflections danced upon the walls and the roof, which was rife with orange lichens and green algae. Some 20 paces ahead, she could see the tunnel's end through the mystical, silvery glow of Hiawassee's body.
*We are forbidden to interfere,* the ghost told her.
*We?*
*All of us.*
Sera frowned and halted beside Hiawassee, squinting into the sunlight at the tunnel's end. She gaped at the scene that stretched before her. Floating in and out of the falls, perched upon the cliff ledges, swinging from the trees, and splashing in the river were hundreds of ghosts. Most of them were women and children.
Ywahoo Falls.
*Sacred Cherokee burial ground,* Hiawassee confirmed mildly.
Sera nodded uncomfortably. The legend was known to her. Some 70 years ago, Cherokee women had journeyed with their children to this spot, rendezvousing under the full moon. Under the leadership of Comblossom, daughter of the great war chief, Doublehead, hundreds of innocents had gathered here, accompanied by only a handful of braves.
The women and their children had intended to walk the 125 miles to a school in Chattanooga, where they had been promised protection and a White man's education. But the Cherokees had been betrayed. A contingent of Tennessee soldiers had intercepted the innocents at Ywahoo Falls and massacred them.
*You were barely six years old,* Hiawassee told Sera gently. *Jesse, he was eight. You were meant to find each other in that lifetime, too. And you did—for the last few minutes. He tried to protect you.*
Tears rolled down Sera's cheeks. *Why?* she whispered. *Why must there be so much hatred?*
*Men are allowed free will,* Hiawassee answered. *You, too, will choose between compassion and hatred.  Choose wisely.*

Book Description
Seduced By An Angel
By Adrienne deWolfe

Kentucky belle Seraphina Jones craves a dashing stranger worth kissing. When she spies her handsome, half-naked hired hand at the riverbank, she thinks her dreams of romance have come true. But this Texican is wanted for murder.

Jesse Quaid can't let Sera's sweet kisses distract him from rendezvousing with Cass, a childhood friend, to clear his name of a crime he didn't commit.

But then a case of mistaken identity turns Cass into Jesse's deadliest rival for Sera's heart.

Now, Sera must find a way to end the feud before the man she loves is lost forever. 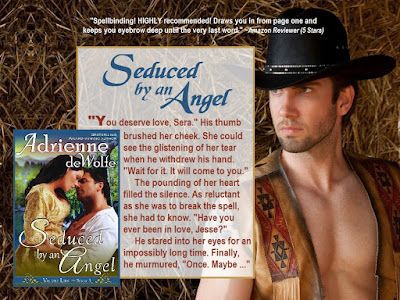 Adrienne is the #1 bestselling author of action-packed Historical Romance novels, where feisty Heroines buck the conventions and true Heroes must be wickedly funny. For sneak peeks of Adrienne’s sassy ladies and sizzling rogues, visit http://LadyLawandTheGunslinger.com. Follow Adrienne on Twitter at @AdriennedeWolfe.
Posted by SpookyMrsGreen at 00:00