Love Hurts is about a young woman who runs a bookshop in Cornwall with her best friend. She falls in love with a local police detective and later discovers that he is a vampire, and that his identical twin brother is a werewolf. She is dragged into their complicated and dangerous lives, to her detriment, where secrets are told and lives are lost... 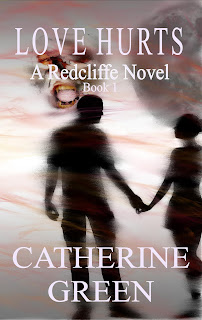 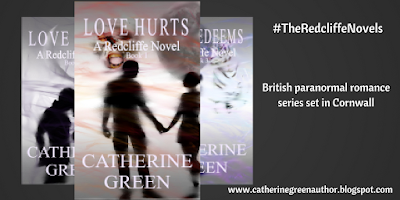 Danny moved away from the table and pushed his hair out of his eyes, a gesture identical to his brother. How could I tell them apart? I don’t know; it was a subtle knowledge, something different in their tone of voice, the way they dressed, and their attitude. Whatever it was, I knew this was Danny standing in front of me. His face became serious suddenly as he spoke.
“I got a message on the mobile from you,” he said, “and the office said you had been phoning.  Is everything alright?”
I told him about the strange women that had visited today and when I said their names he went pale and his body went very still. He spoke in a calm, careful voice.
“They said meet them at 9pm in the Old Cemetery?” he asked.
I nodded, my heart pounding.
“Yes,” I replied, “and the American woman, LuAnn, said she wants to see you again. And she said to go alone; this doesn’t concern your brother or your pack.”
Here I paused, wondering how to tell him the rest of the message, but I knew it was important. He waited patiently for me to continue.
“Danny,” I faltered, “she said you must not take back-up, because if you do she will kill the people you care about. And she was very clear on that message. What did she mean by that?”
I paused,
“She was a bit scary Danny, what kind of acquaintance is she?” I asked.
He was very serious as he replied.
“She is connected to the job in Scotland; they both are.” he said, “I’m sorry Jessica; it looks like we have inadvertently drawn you into our mess. I need to find Jack and go sort this out. Please promise me you will stay home, don’t answer the door unless you know who it is, and phone Jack or me if you get worried about anything, no matter how small or trivial. Will you do that?”
He grabbed my shoulders, staring directly into my eyes, and I gasped, shocked at his forcefulness. I nodded, feeling sick with nerves.
“Yes of course.” I said, “Am I in danger?  What about Liz?”
He relaxed slightly and eased his grip on me.
“Liz will be fine,” he said, “she is of no concern to them. But they seem to have found out about you and your relationship with Jack and me.You don’t need to be overly concerned just yet; hopefully we can settle this tonight. Please just stay home and keep all your doors locked and your mobile phone handy, ok?”
I nodded and Danny left, saying he would call Jack on the way.