Colliding with You by Kelli McCracken 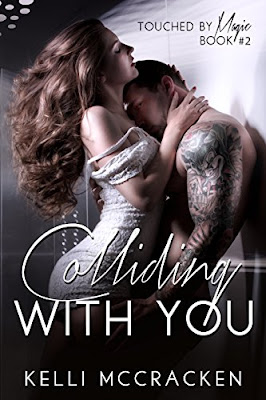 Cori Clarke spent twenty-one years walking in her sister's shadow. Being her bridesmaid is a duty she cannot refuse, even though her sister is marrying a man Cori always desired. The wedding is not a total loss once she runs into Jesse Woods, the older brother of her childhood friend. There are plenty of reasons to resist him, yet part of Cori is begging for Jesse's touch. Regardless of how hard she fights against her desire, an exposed secret leaves her in urgent need of his help.

A complicated relationship is the last thing Jesse wants or needs. Being in a band left little time to find a girl genuinely interested in him, not the rock star he was becoming. Before he and Cori reconnected, he never thought he would be attracted to one of his sister's friends. Cori always meant more to him but admitting as much means confessing to something he has hidden for years. He cannot afford to make himself vulnerable to any woman.

When Jesse's agent makes a ridiculous request, he spins it in his favor, allowing him to help Cori escape a dire situation. Now that she is his responsibility, he is in an awkward position. Being together dredges up old feelings. The ones Jesse has tried to forget. The ones Cori is just discovering.

Colliding with You is the second book in the Touched by Magic Series. If you like contemporary romances packed full of sass, steam, and second chances, then you’ll enjoy Kelli McCracken’s sensual tale of love and loyalty.

Posted by SpookyMrsGreen at 02:35