Time Flies When You Are Writing Books

A couple of days ago I decided to clear out a rather large accumulation of paperwork from our coffee table. This piece of furniture has proven very useful in a small house, because it is a decent size, with two storage shelves underneath, which are invariably used as a dumping ground for mail, books, newspapers, magazines, and now my daughter's toys and colouring pencils. 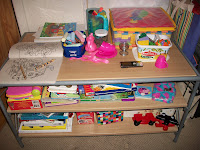 As I dragged out a pile of newspapers and magazines that had been languishing in the dusty recesses, I discovered the North Staffordshire magazine October 2011 edition, which featured me on the front page and gave me a lovely two-page spread promoting my book Love Hurts (A Redcliffe Novel). See, there's me, "Love bites for Cheadle author." I was so proud! 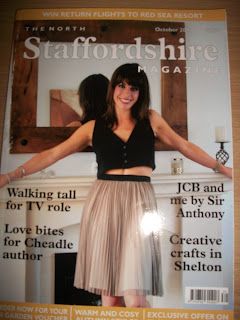 I am originally from the small market town of Cheadle in North Staffordshire, probably best known as the nearest large town to the Alton Towers theme park in the wilds of the Staffordshire Moorlands. Now I live in South Cheshire, less than fifty miles away but still quite a change. 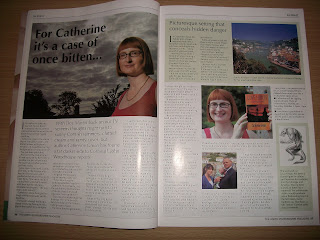 You might wonder why I chose Cornwall in South West England as the setting for my paranormal romance novels. It simply fits the story.  I used to holiday in a town called Looe on the south coast, near to the Devon border, and it was this place that inspired my fictional town of Redcliffe. I also used a little of the tiny fishing village of Polperro for its traditional setting and general Cornish ambiance. 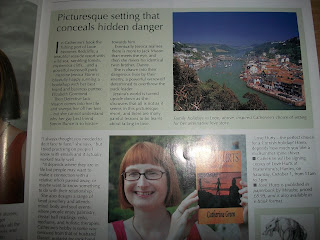 So there we have it. A simple act of household chores gave me renewed vigour for my work, and reminded me just how far I have come in the short time of twelve months. To all fellow Indie authors, never give up!
Posted by SpookyMrsGreen at 02:38