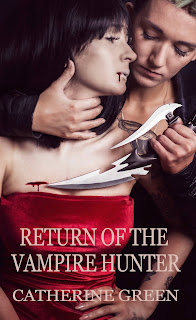 Return of the Vampire Hunter is pure urban fantasy with a hint of seduction thrown in for good measure. Set in Manchester, Northern England, it is a contemporary story with all the darkness of classic Gothic monsters.
Just your average Cheshire housewife – who used to hunt vampires!
Hannah Oakley used to be a vampire hunter. She retired from active service when she fell in love with the female vampire she was hunting, but old wounds refuse to heal. She and the vampire fought almost to the death, and now it seems that the vampire has tracked her down. Hannah must return to work, grudgingly accepting help from a new hunting partner, and she is determined that this time she will finish the job. But can she ignore the old lust for her vampire lover? Is the mother able to be a vampire hunter one more time? And will her marriage survive the ordeal? 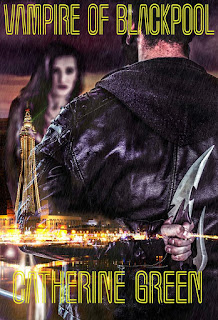 The vampire, the witch and the hunter battle it out in a contemporary Gothic adventure in Northern England.

Meredith Hanson lives in Blackpool, the former Victorian holiday hotspot of Northern England. She masquerades as a reclusive author, feeding on the blood of unsuspecting tourists without remorse. Her life takes on new meaning when she meets a young witch in a local pub one evening. Despite Meredith’s cold demeanour, she finds herself oddly fascinated with Samantha Morris, and falls into an accidental relationship with the girl. It is at this time that a vampire hunter arrives in Blackpool. He is tough, he is determined, and his next target is an ancient vampire that has been spotted in the tourist town. He intends to bring her down and destroy her to save the lives of innocent humans. Will he succeed? Or will the experienced vampire seductress be the cause of his undoing? 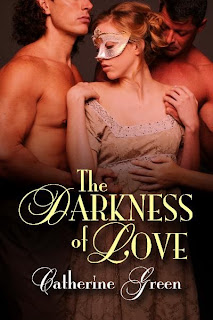 The Darkness of Love tells the tale of Marcus Scott, who we meet in the Redcliffe novels series, and how he became a vampire during his servitude for a Victorian English gentleman.
Lord Gregory Stockton is a powerful and respected businessman embracing the modern era of the Victorian industrial revolution. He has a grand and beautiful manor house complete with a repertoire of servants, and his young wife is charming, attractive, and the perfect lady to his gentleman. The only thing they lack is an heir to the family estate. Lord Gregory knows he can never produce a child, for he is a vampire, although his wife and servants know nothing of his secrets. There are other ways to provide heirs for his estate, however, and Lord Gregory has noticed the romantic attraction between his wife and the young stable hand Marcus Scott. He hatches a plan to bring the would-be lovers together, and then cruelly tear them apart as he continues to build his empire and secure his power base in the south of England. The humans are pawns in the vampire’s game of lust, love and control.

You can purchase The Darkness of Love as both a paperback and eBook from the following vendors:

The book is available to order in all UK and US bookshops, and in most libraries (subject to local ordering process)