Witchcraft on the #AtoZChallenge for #ThrowbackThursday

April has flown by in a whirlwind of chaos and drama, and today I look back to my entry for the #AtoZChallenge in 2015. I wrote about witchcraft and its connection to my Redcliffe novels series set in Cornwall, England. My heroine, Jessica Stone, believed herself to be a very average human being at the beginning of my debut novel. Events turned quickly, and she soon found that her friends were not as human as she believed, and her new boyfriend was a whole different species… Have you read Love Hurts (A Redcliffe Novel)?

Did you enjoy this article? Join my tribe today, and I will send you a fabulous FREE book to get you started… (be warned, my vampires do not sparkle, and my wolves will bite!)
Posted by SpookyMrsGreen at 00:00 No comments:

My Fair Assassin by C.J. Anaya 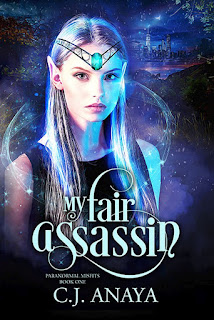 It's not every day a teenage girl is singled out for assassination.

Crysta has come to accept the fact that she is freakishly different. Her shocking white hair, creepy powers, and weird eating habits have prevented her from fitting in with her various foster families. Now that she is fully emancipated and providing for herself, she hopes that life will settle down and become something halfway normal.

Her hopes are shattered when a dangerous man with lethal intent breaks into her apartment, but this enticing stranger isn't what he seems. Is he here to kill her or protect her from others who will?

My Fair Assassin is a romantic love story with elements of paranormal and urban fantasy woven in for an entertaining read. Adults and teens alike will enjoy getting lost in the pages of Crysta's story as she finally comes to accept who she is...or rather what she is.

My Fair Assassin is the first book in the series and free in all Amazon stores. Follow the link for your store: http://myBook.to/myfairassassin

To get My Fair Assassin in other formats including B&N, Kobo, and iBooks, click here.


Did you enjoy this article? Join my tribe today, and I will send you a fabulous FREE book to get you started… (be warned, my vampires do not sparkle, and my wolves will bite!)
Posted by SpookyMrsGreen at 15:07 No comments: 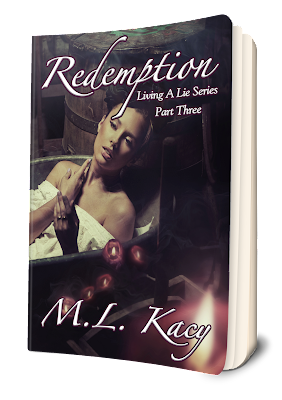 Your life journey can change in a blink of an eye.
A new place, a new beginning, that’s what is in store for me.
Would I make better choices this time?
Mistakes will be made, some are for the better, some for the worse.
I have one saving grace, a redemption of sorts.
I created lives, ones that I would love unconditionally.
They would be the ones that would help me along.
Thoughts of them would always bring me back from the depths of darkness. 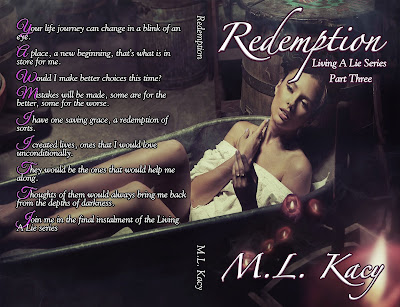 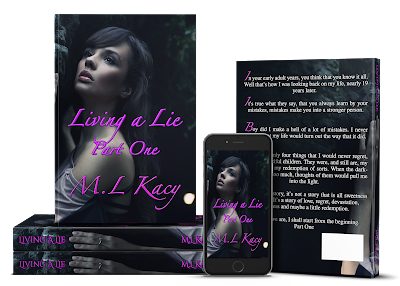 In your early adult years, you think that you know it all. Well that’s how I was looking back on my life. Nearly nineteen-years later, it’s true what they say, you always learn by your mistakes, mistakes make you into a stronger person. Boy, did I make a hell of a lot of mistakes. I never thought that my life would turn out the way that it did. There are only four things that I would never regret, my four beautiful children. They were, and still are, my saving grace, my redemption of sorts. When the darkness became too much, thoughts of them would pull me into the light.

This is my story, it’s not a story that is all sweetness and light. It’s a story of love, regret, devastation, darkness and maybe a little redemption.

So here we are, I shall start from the beginning.
Part One 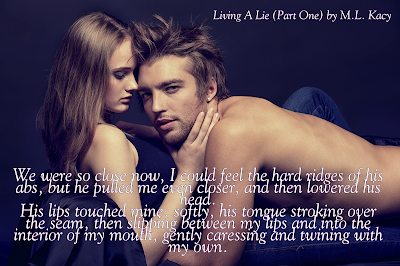 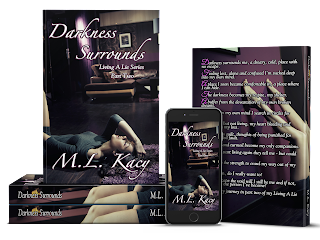 Darkness surrounds me, a dreary, cold, place with no escape.

Feeling lost, alone and confused I’m sucked deep into my own mind.

A place I soon became comfortable in, a place where I can hide.

The darkness becomes my respite, my shelter.

A buffer from the devastation of my own broken dreams.

Trapped in my own mind I search in circles for
answers.

Surviving but not living, my heart bleeding and broken from my loss.

Torn up by guilt, thoughts of being punished for some perceived fault.

Confusion and turmoil become my only companions.

I need to start living again they tell me - but could I?

Do I have the strength to crawl my way out of my own mind?

Then again, do I really want to?

If I do escape the void will I still be me and if not, can I accept the person I’ve become?

Follow my journey in part two of my Living A Lie Series. 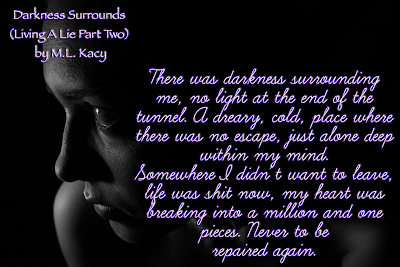 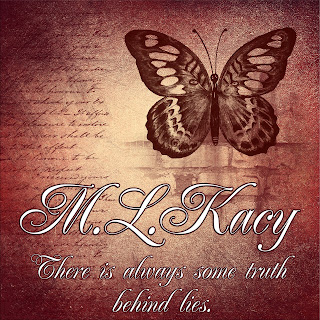 I have been involved in the indie community for several years and have always loved how everyone comes together in support of each other.
I love writing and reading, living life with my family, and always coming up with new ideas and putting then in to practice.

Words have a way of healing someone, so I will carry on writing, included events that have happened and taking you all on a journey with me.

Posted by SpookyMrsGreen at 04:00 No comments:

Over 100 Indie authors have placed one or more of their eBooks on sale for $.99 or FREE for this two-day event as a way to help readers find new authors. To celebrate, there are several things taking place. 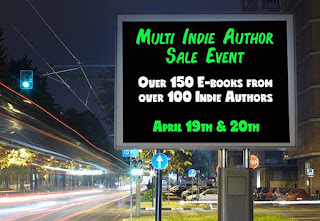 
2 - RAFFLECOPTER - Want to earn chances to win the grand prize of an Amazon Gift Card valued at $100, then check out our Rafflecopter link. There are hundreds of ways for you to earn a chance to win and find new authors at the same time! http://gvwy.io/q8lpu6l


3 - LIST OF BOOKS ON SALE - Click on this link http://smarturl.it/IndieSale to get the the list of all the books on sale and the links you can find them at. But hurry, because the prices go back up after the event is over! Don’t miss out!

The anticipated cover reveal from Holly J Gill is finally here.
Check out the exciting blurb!
Are you ready for Mr. Wright?
She is his addiction—his misfit.
She has got under his skin, opened his heart and forced herself in.
Luke Wright sits under his father running a multinational company ‘Wrights Enterprisers’. Much to his frustration, he is called to sort out a department, forcing him to miss a trip to New York. However, when he walks in, he sees a young woman and becomes powerless, losing his morals, and begins breaking his own rules.
Can she be his Destiny?
Why can’t she stop fantasizing about him?
Destiny Love is young and wants for nothing and is determined to make it in London. Things aren’t quite going to plan, though, and to top it off there’s a new bossman, meaning new rules. Will Mr. Wright give her a chance to prove herself?


Posted by SpookyMrsGreen at 00:00 No comments:

Later this week I will be participating in the Multi Indie AuthorBook Sale Event. It is basically a collective of authors (over 100 so far!) who will offer books for FREE or for 99 cents. The event runs from 19th – 20th April, and alongside free book giveaways, you can enter a raffle to win an Amazon gift card, you can win free gifts from your new favourite authors, and you can meet some new friends. See you there! 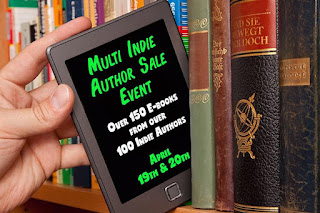 Did you enjoy this article? Join my tribe today, and I will send you a fabulous FREE book to get you started… (be warned, my vampires do not sparkle, and my wolves will bite!)

#ThrowbackThursday and the #AtoZChallenge

Two years ago, I participated in the April #AtoZChallenge. I did it to explore themes in my Redcliffe novels series, and a method for keeping up with a regular writing routine. It was a lot of fun, but also a lot of hard work, and I decided not to actively participate in the #AtoZChallenge this year because I simply could not fit it in with my current daily schedule. 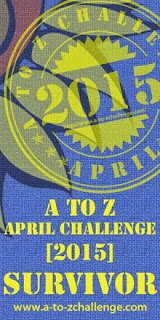 I decided to look back at my #AtoZChallenge blog post for 13th April 2015. It was the letter K, and I wrote a post about one of the characters in my upcoming novel Eye of the Tiger (A Redcliffe Novel). She is a werewolf, and you can follow the link to read more. I had planned to release Eye of the Tiger earlier, but events intervened and so now I am rescheduling. Tentatively, I would like to release it at the end of June, but I am currently working with a cover designer and more updates will follow.

Did you enjoy this article? Join my tribe today, and I will send you a fabulous FREE book to get you started… (be warned, my vampires do not sparkle, and my wolves will bite!)
Posted by SpookyMrsGreen at 00:00 No comments:

I Dream of a Writing Retreat

We are halfway through the school Easter holiday, and I have not been near my manuscripts for weeks. I just can’t find the time lately. What with my domestic challenges, the need to develop my pagan housewife bog into a viable income generator, building my readership of the Redcliffe novels, and all the other minutiae of modern life, where do I fit it in? 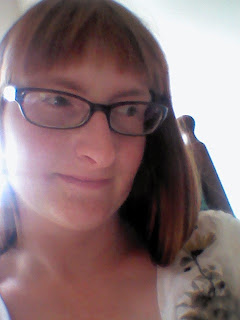 I know that patience is a virtue, and I know that it won’t always be like this. My younger daughter starts primary school in September, and I will have five days per week in which to work during school time. Surely, I can do it then? But I want to do it all now! My stories are niggling, my characters are shouting, and they all need to be dealt with. I can barely think straight. A writing retreat sounds fabulous, but again, I cannot fit it in with everything else that is active in my life. One day… one day…

Did you enjoy this article? Join my tribe today, and I will send you a fabulous FREE book to get you started… (be warned, my vampires do not sparkle, and my wolves will bite!)
Posted by SpookyMrsGreen at 02:08 No comments: