Today is Hump Day Hook once again. My, the time goes quickly these days! During recent weeks we have been catching glimpses of life in the Cornish town of Redcliffe after Jessica Stone discovered the existence of vampires and werewolves, and began to learn about her own hidden heritage. Now I have decided to take us back to the beginning. Here is an excerpt from my debut novel Love Hurts (A Redcliffe Novel). This is an excerpt from the very first time that Jessica Stone met Jack Mason, on an ordinary midweek evening... 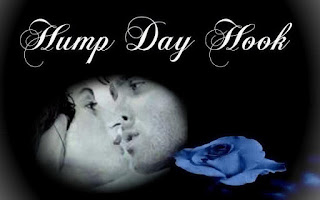 Suddenly he was pulled back and I staggered as he was torn away from my body.  I blinked and opened my eyes to see Simon standing in front of me, his face blazing with anger.  He shoved Jack away from me and almost snarled.  I had never seen him this angry.
“You stay away from her, Mason,” he growled. “She is my friend.”
Jack’s face became stern, almost stony as he replied in a cold voice.
“Be careful, Simon,” he warned. “I think we should allow Jessica to decide what she is doing.  She seems perfectly capable of taking care of herself.”
I felt a sudden rush of anger.  How dare Simon interrupt something so intimate!  My voice was strong and steady as I straightened up and faced the two men, glaring at Simon.  He took the full force of my rage, and it surprised him.
“Simon, what the hell are you playing at?” I said angrily. “For your information I felt a bit faint inside and Jack brought me out here for some fresh air since it was so stuffy in the pub.  And you don’t even know him do you?” I added, the rage subsiding as quickly as it rose.

There we go! If you like the sound of that then read the entire novel for free over on Wattpad. It is a limited special offer in preparation for the release of the third novel Love Redeems (A Redcliffe Novel), which will conclude the initial story of how Jack and Jessica met. But never fear, there will be lots more books in the series!

Now, if you enjoyed that excerpt, why not check out some other authors in our Hump Day Hook group? Please visit the official blog here, or find us on Facebook. Happy humping!