Today I have the pleasure of sharing a book review for the very intriguing Signs of Destiny by C. Michael Bennis. 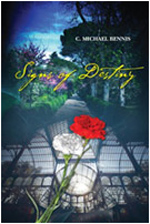 Signs of Destiny is a passionate story of love, survival and the incredible power of the human spirit.

When I first opened this book I was quite excited to see that the prologue was set in Liverpool, UK in 1967. Anyone from the UK will understand the importance of this time period and this particular location, even those like myself who were not born until a few decades later! I was, however, a little confused in the beginning. I’m not sure if it was intentional, but I struggled to connect with the characters we were introduced to, and I felt very hostile towards Alison after I read a little of her story (don’t worry, I won’t spoil it for you!). Anyway the confusion continued probably for the first three chapters, but then something clicked.

I began to feel an emotional connection with the protagonist, Rafael Valverde, and I was left wondering just how the prologue fitted into the rest of the story, which was set mainly in Madrid. It kept me hooked and needing to know more. The story is written based on true-life experiences from the author, and he pours his passion into the words. The novel is both poetic and dramatic, while still believably human.  It touches on issues that we as a culture are uncomfortable with, such as sickness, infidelity, and the human ego. This novel is both romantic and rough, and for that reason I highly recommend it.
Posted by SpookyMrsGreen at 00:00