Though… perhaps not all readers as vampire stories differ greatly. Some have gloomy, horror atmosphere, some are full of blood and violence, still others brim with dark sensuality. How should you know ours would be to your liking? Apart from reading a sample chapter on Amazon or Smashwords to get a feel of the tale, you can learn about various aspects of a vampire’s life in our world during In Blue Poppy Fields release tour. Let’s first take a look at the book and then we will move on to our topic for today. The effects of a demon’s blood. 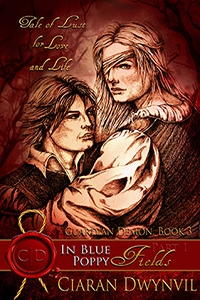 In Blue Poppy Fields: A victim to another man’s cruelty, talented and beautiful theater actor Adhemar Lebeau learned not to trust and not to love anybody but himself. Falsely accused of his master’s murder, he has to accept assistance of mysterious Count Sanyi Arany to later discover his savior is a vampire. Forced both by a fatal illness and aftershocks of torture experienced during his unjust imprisonment, Adhemar agrees to the only possible cure. Rebirth.

Healed in body but not in mind, he guards his independence, free will and heart. He is not able to give love, only the fulfillment of lust. Yet, satiation of sensuous longing is not enough for his Sire and he knows it. When an eerie malady strikes and seems to deplete Sanyi’s life energy for unknown reasons, Adhemar understands his fears and agrees to keep a street boy, Reyach, as a pet for both of them in hope it will soothe the unspoken worries.
Out of necessity he finds himself in the role of the only hunter in their company, and out of attachment he accepts the responsibility readily. Indulgence in blood and carnal pleasures fill his nights and vampiric powers give him the feeling of safety. Until the evening when he carelessly falls prey to High Demon Belial’s plays that quickly turn into more than either of them has bargained for.
In spite of a hard start, Adhemar feels burning urge deep in his heart and no matter how much he denies it, the cause of the strange sensation is a budding seed of affection brought to life by the insufferable demon. But letting Adhemar learn to love somebody other than him is not what seemingly innocent Reyach plans.

The blurb has only revealed the book is about vampires. But here in the post we will unravel a secret about blood.
What secret? you might ask. It always looks and tastes the same, doesn’t it? Yes, we all have tried to stop the bleeding of a finger by sucking at it at least once, so I will not describe what blood tastes like to us. And when it comes to our sense of vision: we may be able to see the difference between bleeding from a vein and from an artery. But that is all.
A vampire’s understanding of blood is much deeper. After a couple of successful hunts he realizes that its taste differs from victim to victim and that the adrenaline rush and endorphins coursing through one’s veins change it for better. For this reason he will try to hunt regularly though he might find other sources of blood too. While his lovers might become willing donors and the surge of endorphins their veins carry during lovemaking twined with bloodtaking will almost compare to the experience of hunt, it won’t be the same. The fear a prey feels before his death adds an irresistible flavor to his blood. The flavor that will be sought again and again.
That’s the relationship with mortal blood every vampire develops quickly. Yet, there are also other crimson treats.
A demon’s blood is one of the two most powerful essences a vampire can swallow. And with even a single draught an addiction creeps on him. The blood of a demon is like a drug. It intoxicates the vampire, it engulfs him in incessant craving for more, it makes him dependent on its taste. And as if it is not enough, it arouses him to the point when pleasure mingles with pain. It stretches him on the racks of desire and he can’t ever have enough of its taste and its effects.
Why would anybody want to take but a sip of this treacherous, dangerous fluid? Well, not many vampires have ever had the privilege to meet a demon. Much less to take from him. So the effects are not widely known. And when it does happen and the vampire tastes this essence, he doesn’t ever want to break the bond the blood created. He knows he is addicted and doesn’t wish to change anything about the fact. Is it a curse or a blessing? You can judge after reading In Blue Poppy Fields.

For now here is a short excerpt full of red bliss that will allow you to catch a glimpse of what it feels like to take from a demon:
With a growl worthy of an enraged mountain lion, he bit into the demon’s neck and… almost died in pleasure. What was this?! Blood. But it didn’t taste like ordinary blood. This was the sap of the Tree of Life, this was divine ambrosia, this was a heavy drug flooding all his senses, attacking him from all directions, rushing him relentlessly, forcing him to succumb to the sensation, to the taste, to the feel. And he did so with a quiet moan and body all taut with unknown pleasure.

Did the little peek into our world capture your attention? In Blue Poppy Fields is currently available at Amazon and Smashwords. 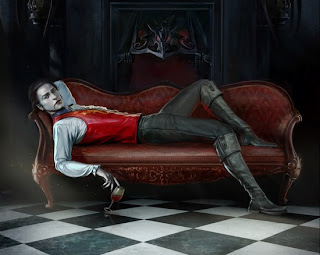 It can be read without being familiar with other books in the Guardian Demon Series but you now have an opportunity to win one of the twelve copies of Trails of Love I Crawl Part 1 that opens the beguiling world of this series. Participation is easy enough for anybody over the age of eighteen. The more you help others find me and Guardian Demon Series books, the more chances to win you will have.
What can you do?
My giveaway form will give you more suggestions. Winners will be announced on my blog on the 11th of April. I hope to see your entry in the giveaway and thank you for your help in spreading the word of mouth about Guardian Demon Series.
a Rafflecopter giveaway

With this I hand over Catherine’s blog back to her. It has been my pleasure to be your guest, Catherine. Thank you for having me over today.

*Vampire image courtesy of Pinterest*
Posted by SpookyMrsGreen at 00:00